It’s here. #TFIOS. The movie adaptation of John Green’s beloved YA novel The Fault in Our Stars. And stock just went WAY up in Kleenex. 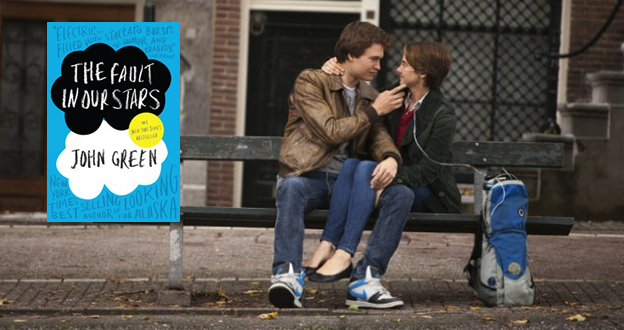 I convinced a friend who hadn’t yet read the book that she totally wanted to join me on Thursday night to attend “The Night Before Our Stars“– a showing of the film that was playing in about 650 theaters nationwide, followed by a live simulcast experience with the stars, director, and producer of the movie. Oh, and the YA author extraordinaire himself, John Green.

As the theater seats filled with audience members, it became very obvious that I was among the minority, not being a teenaged girl and all. I only note that because of the effect it caused at any pivotal moment in the film, as the sobbing became a bit distracting… but I digress. To the movie!

[SPOILER ALERT: There may be bits and pieces from this point on that give away key plot points or events in the story, so if you haven’t read the book or watched the movie, don’t risk reading further until you’ve done so. Oh, and for goodness sake, how have you not read the book yet??]

It’s clear to anyone who knows me that I am a stickler when it comes to film adaptations of books that I have loved. Omissions I can usually tolerate, if they’re not incredibly important to the development of the story or the characters, but changes are what usually trip me up. By the end of the movie, I was happy to declare that this was the best adaptation I’d ever seen when it comes to staying true to the heart of the story and the portrayal of the main characters.

Yes, there were omissions, and watching the twitter feed during the simulcast experience last night (#askTFIOS), some of them bugged people. But, I could handle things like the omission of Augustus’ previous girlfriend and Hazel’s friend Kaitlyn, and I understand how the focus must narrow in a film in a way that often leaves peripheral characters/events/scenes out, all in the interest of time. There were so very few changes that I noticed in the movie, a line coming out of Hazel’s dad’s mouth instead of her mom’s, or having the house phone ring instead of her cell when Hazel receives *the* call, or the manner in which Hazel comes upon the precious papers that serve as the end of the story. Changes like those really don’t affect the meaning behind the events. Or the feelings, which is what is at the core of the entire novel.

I loved that Shailene Woodley never once made me question if I was seeing Hazel Grace Lancaster up on that screen. Her performance hit every single note right for me– her facial expressions alone conveyed the thoughts we were privy to in the novel’s narrative, even when there was no voice-over to spell it out for viewers. Ansel Elgort embodied both Augustus’ confidence/cockiness and eventual vulnerability. And if the sighs and gasps that filled the air of our theater were any indication, he was just the perfect level of hotness, too.

While I didn’t sob loudly with accompanying moans like many in the theater, I definitely used some of the tissues I had packed. As a thirty-something mom, though, my most intense emotions came with the scenes that included the parents. I’ve never faced any serious illness or hospitalization with any of my three children, so I cannot begin to fathom what that must feel like, but the love within the families in this story was so palpable up on the screen that I felt kicked in the gut watching the parents care for their dying children. If I had any complaint at all about the film, it would be that the roles of the parents were minimized from the original novel. Hazel’s dad’s frequent emotional expression wasn’t as evident, and Augustus’ parents had only very short appearances. But, I’m not really lodging that complaint, because I understand that the focus had to be primarily narrowed to the relationship between Hazel and Augustus, and that my adult, parental perspective is not that of the main intended audience member.

Have you seen the film yet? If you attended “The Night Before Our Stars,” what did you think of the simulcast? Join the conversation on Jennifer’s post- What Did You Think of The Fault in Our Stars Movie? (With Spoilers) to share your opinions!

« What did you think of The Fault in Our Stars Movie? (with Spoilers) #TFIOS
Jack of Spies »