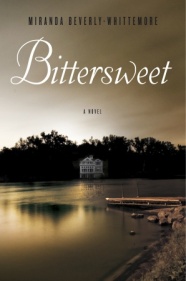 There’s a reason the cliche “the grass is always greener on the other side” exists. For Mabel Dagmar, the other side is her roommate Genevra Winslow who Mabel assumes doesn’t know she exists for the first half of their college year as roommates in Bittersweet by Miranda Beverly-Whittemore. When Ev thaws, however, she does so in a major way and invites Mabel to her family’s summer home.

As Maybel has nowhere else to go – either working for her parents’ dry cleaning business back home in Oregon where there is what sounds like plenty of unexplored nastiness or staying with her miserable aunt in Baltimore are not exactly on her dream list – she happily volunteers, even as Ev explains that there is a ton of hard work. Ev has been granted a cabin on the family compound now that she’s 18, but she has to fix it up in a week to pass her parents’ inspection.

After a week of hard work, nothing is said about the inspection when Ev’s parents arrive. When Mabel can’t stand the suspense and asks Ev’s dad if they passed the inspection, he simply gives her an odd look and doesn’t answer. That’s just the start of the mysteries on the compound as Mabel starts to realize that not all is as it seems.

As she meets more and more of the extended family, everything becomes murkier and murkier. Ev’s aunt Indo recruits Mabel to dig through the family secrets to find a folder, luring her with the promise of leaving Mabel her cabin once Indo dies. As Mabel digs through the paperwork, she starts to uncover clues but the flummox her.

As the summer wears on, Mabel starts to realize that the family is rotten from the inside and that she needs to start choosing sides. The book is a fascinating look into the dark side of humanity that is still able to pretty itself up for daily life. There is no one in the book to truly look up to, with the possible exception of Ev’s 14 year old sister Lu.

There is certainly plenty of mystery throughout the book with odd happenings and interactions amongst the characters to keep the pages turning on this nearly 400 page book. Interestingly, not all the mysteries were hashed out at the end of the book, leaving some open questions in my mind. It is not a book that left secrets open because there is a sequel coming – the epilogue pretty much assured that. It left me feeling slightly unsatisfied.

While the characters are deeply flawed, they are also incredibly interesting. Ev, Mabel, Lu, and one of her older brothers Galway has the main parts, but Masha the Russian cook and Tilde, Ev’s mother, are just as different and compelling. Throughout the book, you spend your time trying to decide who’s lying, but there’s also the question of whether you care that they’re lying, which is almost a bigger issue.

Written by 5 Minutes for Books contributor Michelle who is grateful that her friends actually are her friends. See how they support her via her blog Honest & Truly! and follow along with her on Twitter where she is also @HonestAndTruly.