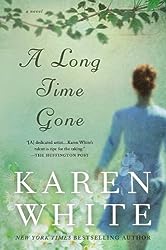 Vivien Walker has returned to her childhood home on the Mississippi Delta after 12 years away, following a pattern set by the women in her family of leaving without saying good-bye and then returning unexpectedly, often years later. 12 years is a long time to be gone, and yet Vivi is surprised to find things have changed – the grandmother who raised her and her brother when their own mother was elsewhere has died, her mother, Carol Anne, is in the beginning stages of Alzheimer’s and doesn’t understand Vivi’s anger, and a recent storm has uprooted a tree, revealing a long-buried body.

Alternating between Vivi’s story in the present is that of Adelaide Walker during the 1920s in the years leading up to the Great Flood. Adelaide has lived a sheltered life, raised by her aunt and uncle after her mother walked off a bridge. Adelaide’s naivete is slowly destroyed by her best friend, Sarah Beth, her cousin Willie, and a man named John, who Adelaide falls in love with. It’s clear Adelaide is an ancestor of Vivi’s but just how they’re related isn’t revealed until late in the book.

Entries from Carol Anne’s diary are weaved in with Vivi’s and Adelaide’s stories, describing her own feelings of abandonment from her mother having left for six years when she was a child following a horrible incident. As Carol Anne grows from a rebellious teen into a young woman mixed up with drugs and drifters, she feels she has no other choice but to leave her children as a way to show she loves them.

Vivi tries to help with the investigation of the body in her yard, determined to find out who the woman was and how she ended up there. She’s dealing with her own demons as she quits the pills that keep her going so her ex-husband allows his 12-year-old daughter, Chloe, to stay with Vivi while he’s on his honeymoon, and she also needs to get over her resentment at her mother leaving her as a child. And Tripp, her childhood best friend who has never kept secret his feelings for her, is the knight in shining armor she’s not sure she wants.

Tying the three stories together is the house where all of the women live, the maids who work for the family, the watch repair business that’s passed down through the family, the family garden, and the tendency of the Walker women to leave their children to be raised by others, returning only when it suits them. Themes of anger, resentment, forgiveness, love, alcohol and drug use and abuse, racism, and many others are deftly handled by the talented Karen White.

I greatly enjoyed A Long Time Gone, and while the changes in point of view and time period are at times jarring, as is typical with this type of storytelling device, it works well. The southern setting, dialog, and culture always make for an entertaining summer read, and it’s clear White knows the South quite well.

Nancy is a fan of good sweet tea and yearns for summers spent in the South. She writes about her boys, books, and life in Colorado at Life With My Boys and Books.

« The One And Only
Bittersweet »