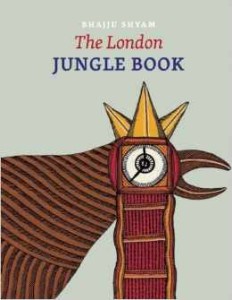 Bhajju Shyam was born into a very poor tribe in the forests of central India and grew up learning the traditional art of the Gond people and decorating the mud walls of the family home. When he was 16, he was apprenticed to an uncle who was a famous artist. Soon, Shyam was surpassing him and working on his own. When he was invited to London to paint murals on the walls of an upscale Indian restaurant in Islington, it was truly like entering a new world. Shyam expressed it as he knew best–through paintings.

The result is a sort of backwards Jungle Book–London and modern society viewed through the lens of someone from a completely different time and place, and interpreted back for his own people. Shyam’s own tribe was studied by an anthropologist, Verrier Elwin, who wrote several books about them. Now, it was a Gond tribesman chance to turn the tables and write a book about England.

The result is seriously fascinating. I probably use that word too often but I cannot overstate how cool this book is. From his first glimpse from the airplane of the fields of England, spread out below him like an emerald sari, to his description of the number 30 bus as a faithful dog, a companion and friend who would always guide him home, The London Jungle Book

offers a way to look at modernity with fresh eyes.

He pictures English people as bats and pubs as the places that set them free. “In the evening, they all emerge, flocking to restaurants and pubs, wearing their black clothes and laughing,” he says. “I think of them as creatures that come to life in the evening.”

Shyam brings fresh eyes to a world-weary metropolis. “In Gond belief, there is another world below this one, and I have discovered there is such a world in London as well, though different from the Gond one,” he says of the London Underground. His picture shows the tube as an earthworm, and all the connecting lines as twisting snakes, because snakes signify earth in Gond painting. He turns Big Ben into a giant rooster with the clock for its eye, because roosters signify time for the Gonds, and Big Ben signifies time for the Londoners.

This updated edition of The London Jungle Book

marks the 10th anniversary of Shyam’s trip. I’ve tagged it both adult and young adult because it has something to offer all ages. It would be a great gift for any traveler, including yourself, whether someone just starting out or someone who’s traversed the globe. Because, after all, why do we travel if not to be able to see the world and our place in it with new eyes?