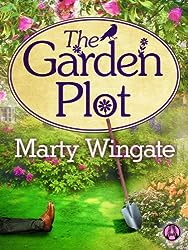 Pru Parke is nearing the end of her self-imposed one year in England and still has not found a job that will allow her to stay there. Born to an English woman living in Texas, she’s always felt like England is her true home, with her love of gardening rivaling that of any English person. She’s applied for the job of head gardener at several estates, and in the meantime, has taken on some smaller jobs to pay the bills. One of those jobs is for Mrs. Wilson, who wants her garden (aka backyard to us Americans) cleared out and made presentable for a garden party. While clearing out some ivy in the back of the garden, Pru wanders into the shed, and discovers a tile mosaic under a layer of dirt. Suspecting it may be some Roman ruins, which are common in London, she returns to the shed, only to find a dead body in the corner.

Pru finds herself getting involved in the investigation as she feels certain that Mr. Wilson did not commit the murder, and in the process starts falling for the Detective Chief Inspector in charge of the case. She also has to deal with possible mice in her basement, the imminent return of the owners of the apartment she’s renting, the Wilsons’ nosy neighbor who may know more about the murder than he’s letting on, friends back in Texas who want to know when she’s returning, and one job rejection letter after another.

The Garden Plot is considered a cozy mystery, and as you can tell from the cover, it’s definitely not hard-boiled detective stuff. Pru is a talented gardener, very knowledgeable about English flowers and plants, but she’s not very street smart and a bit gullible. The more the DCI tells her to stay away from the case, the more involved she gets, making some not so smart decisions about what information she shares with him.

I’m not much of a gardener, so many of the flowers and plants mentioned were unknown to me, though the references to the Roman artifacts so ubiquitous in London were interesting. I enjoy reading about subjects I’m unfamiliar with. The supporting cast of characters in The Garden Plot are amusing and typically British — Pru’s friend and realtor Jo, who knows more about the mice than she’s letting on, Jo’s daughter and her partner, who are expecting a child, Malcolm, the nosy neighbor who quizzes Pru on her rose knowledge, and Christopher, the DCI who is bemused by Pru.

I enjoyed The Garden Plot and those who enjoy gardening and light mysteries will enjoy it as well.

Thanks to TLC Book Tours for the Grand Prize of a $30 egiftcard to the ebook retailer of the winner’s choice, and a First Prize Mystery Prize Pack of three mystery mass market paperbacks and a gardening title from Random House!