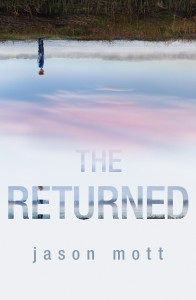 When a loved one dies, we go through a mourning process that eventually comes to a point of acceptance that our time with that person has come to an end. But what if it hadn’t? What if we were given a second chance somehow? In Jason Mott’s new novel The Returned, that very question is explored, and though some people may have a quick and happy response to that premise, this powerful and provocative story presents multiple perspectives on the idea of the once dead returning to life.

The way in which “The Returned,” as they come to be called, actually come back to life is unknown. But suddenly, people begin to pop up around the planet, seemingly out of nowhere, often very far from their previous homes. These people had all died at some point, maybe only a few years ago, maybe many. The individuals appear to be just as they were before they had died- the same age, the same bodies, the same memories of their lives up to the time of their deaths. As this is happening all over the world, an international organization is created to assist in connecting the Returned with their families, if the families want to be reconnected, that is.

At the center of the novel is one family affected by the return of their eight-year-old son Jacob. Harold and Lucille Hargrave buried their only child almost fifty years earlier, when an agent from the International Bureau of the Returned comes to their door with Jacob by his side. At the point of Jacob’s reappearance, the phenomenon of the Returned had been well-documented in the 24-hour news cycle, and Harold and Lucille had even briefly discussed what they would do in the event of Jacob’s return. How they felt about an abstract idea of the resurrection of their long-lost son can quickly dissipate when confronted with what appears to be the real thing. While Lucille embraces her deep religious faith even more in the face of what she can only describe as a miracle, Harold struggles with his disbelief and the removal of the natural order of the world.

As the Returned begin to number in the thousands, communities all over the world are shocked to their cores, and it doesn’t take long for polarization to kick in between factions who believe this to be a wonderful gift and those who react out of fear and desire the Returned to be removed from their cities and towns. Though many characters are introduced in short vignettes between chapters, the main focus remains on the Hargraves’ small town and the effects of The Returned on the people who live in this tight-knit community. The result is an intimate look at human relationships and the effects of the loss of loved ones, described in a harrowing narrative that possesses a sci-fi premise but fits much more squarely into the literary genre.

Interesting to note- The Returned has been optioned by Brad Pitt’s production company, Plan B, and will air on ABC this fall under the title “Resurrection.” From the trailer, I can see some changes in the details, but it looks as if core of the story and the emotion involved in it remain.

The above review was written by Dawn, expertly as always, and I (Nancy) wanted to add my thoughts, as we both received review copies, Dawn from TLC, and my own from NetGalley. The Returned introduces a question that most of us probably wouldn’t want to answer — how would we feel if our loved ones returned from the dead? Adding to the indecision is the uncertainty of what these people are – just a copy of their living selves? Or something else? What’s interesting to me is how Lucille and Harold deal with Jacob’s return in such different ways, not only due to their differences in religious belief but how they perceive Jacob’s existence. I also enjoyed the glimpses into the lives of other Returned, how they handled their fates as well as how they’re received by their families.

As part of the TLC Book Tour, we’re happy to be able to offer a copy of The Returned to one lucky reader, US/Canada addresses only. (No PO boxes, please.) Just start off by entering your email address in the Giveaway Tools widget below, then follow the directions to log your entries.

« Moxie and the Art of Rule-Breaking
Jessica Darling’s It List: The (Totally Not) Guaranteed Guide to Popularity, Prettiness, and Perfection »