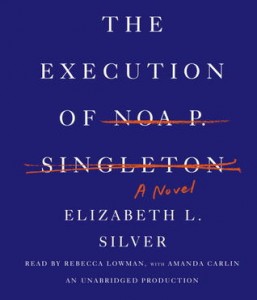 Trying to understand a character is always a challenge, as you do – and should – feel like there is more than the simple version you’re shown. In The Execution of Noa P. Singleton by Elizabeth Silver, this was true far more than in most books I read. The novel begins six months before the scheduled execution of convicted murderer Noa P. Singleton when she has yet another lawyer appear who wants to help her appeal her case.

Noa isn’t interested. She fully admits that she pulled the trigger that killed Sarah Dixon and that she was at fault. She did the crime, and she is comfortable paying for her sins. When she realizes shortly into her discussion across the Plexiglass and via phone with Oliver Stanson, ostensibly her new lawyer, that Marlene Dixon is his employer and behind the last ditch effort, she is surprised but only moderately so.

The mother of the woman she murdered is a high powered lawyer in Philadelphia where Noa lived, and though she was instrumental in Noa being convicted – playing the victim sitting in court every day while also being (very obviously) treated with chemotherapy for breast cancer then providing an incredibly impactful victim  impact statement during sentencing – Marlene claims to have not changed her heart but revealed the heart she always had and wants to ask the governor for clemency. In fact, she’s founded MAD (Mothers Against Death) to help those convicted of capital crimes.

Though Noa is initially unwilling, Oliver eventually convinces the defensive and sarcastic Noa to let him try, if not for her for other inmates as they can use her experience to help them shape other cases. Oliver continues to visit her and try to gain enough information to file another appeal or help with the clemency petition, but Noa isn’t forthcoming. She doesn’t talk about the murder but instead about her history from her mother dropping her on the head as an infant to finding her father to her best friend from childhood Persephone Riga.

The novel weaves between past and present and the months before X-Day of Noa’s execution pass. This is one of those books without an obvious hero or villain. Everyone has some of each in there. Marlene is by no means selfless, much as she attempts to claim. Noa takes on the guilt for killing Sarah, but there is so much more to her story making her sympathetic, though her sarcasm and snark tend to make her dwindle slightly in the reader’s eyes. Of course her deadbeat father is no prize, but even he has some redeeming qualities about him.

It is interesting how the book is primarily told through Noa’s eyes, but the end of each chapter includes a letter from Marlene to her dead daughter that shows more of Marlene’s personality and also puts a different spin on Noa’s actions and reactions. I have a feeling that the character sympathies from this book could easily veer amongst characters, depending on the reader.

Guilt plays so heavily in this book, and it’s a theme I can relate to – having grown up Catholic attending Catholic schools and with a mother who excels in the art of dispensing guilt. I was fascinated to see how each of the characters handles the guilt they claim – and in some cases, don’t claim. Though the ending of the book left me wanting more closure, I walked away feeling something for all the characters and the losses they experienced, knowing far more about them than I have about characters in a book in a long time.

Written by Michelle who read this book as part of the From Left to Write book club. She wrote a post inspired by the book about her relationship with her daughter. It is her goal to never be in a situation anyone in the novel faced. See what challenges she deals with on a regular basis as she shares on her blog Honest & Truly! or follow along with her on Twitter where she is also @HonestAndTruly.

« The Widows of Braxton County
The Lion’s World: A Journey into the Heart of Narnia »