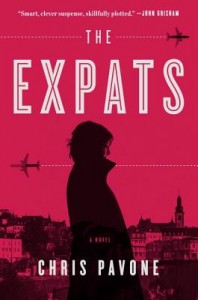 You know a book is a good one when you’ve already promised to lend it to someone before you’ve even finished it. And possibly when you pretend laundry doesn’t exist just so you can get a few more pages in. That was the case for me with The Expats by Chris Pavone, a story about a family that moves to Luxembourg when the husband’s new job requires a transfer and the unraveling of their lives and secrets that follows.

Katherine Moore – now known as Kate once she moves to Luxembourg – was a CIA agent until she quit to move with her family across the Atlantic. She hadn’t been a field agent for five years, since an event alluded to throughout the book, that made her realize she was no longer cut out for the hard decisions and type of life that requires. Her husband is an expert in computer security, but he refuses to tell her the bank that hired him in Luxembourg to challenge the security due, he claims, to the sensitive nature of hiring a security expert to test a bank’s systems’ resilience.

The book goes back and forth between present day and two years prior, when the Moore’s first arrived in Luxembourg. This allows for a great deal of suspense and slow unwinding of the stories and secrets and lies that are discovered over that two year period, all the way through to the last pages of the book we continue to learn more about the what and the how and the why. Fortunately, there is different fonts between the present day and the flashback, which makes it easier to follow.

Kate makes friends with another expat family, Julia and Bill McLean, who strike her as off. Her CIA instincts come to the forefront, and she soon discovers that they are FBI agents on loan to Interpol, not the potential assassins she first fears they may be. She’s convinced that they are in Luxembourg to investigate her family, but she isn’t sure whether they are there to follow up on the incident from five years prior that caused her to move from the field to a desk job at the CIA or whether they are investigating her husband, for reasons unknown to her.

The book is told through Kate’s eyes, though her secrets are not revealed instantly. Even she remains a mystery for much of the book. She is a strong character who wants nothing more than to be a stay at home mom, then realizes how much she doesn’t want that once she has that life. Adding that struggle to the thriller nature of the book where she is investigating the McLeans and why they are in Luxembourg only adds to the depth of her character.

The remaining characters aren’t as deeply drawn, but much of that is solely because they are seen through Kate’s eyes and her perceptions of them. Julia is a best friend who still seems to be holding something back, especially once Kate discovers who she really is – or who she thinks Julia really is. Bill is primarily a background character, there as a partner and a slight bit of sexual tension, but he’s primarily a friend of Dexter’s – her husband, the computer geek. Dexter and the two children are also not as filled out as they could be, but the book is so focused on Kate and her struggle for her identity and determining how to keep her family safe and together that it doesn’t matter.

While some may not agree with all the decisions that any of the characters in the book make, the very humanity that those decisions represent are partly what draws me into the book. I loved not knowing from where the next curveball was coming, let alone what it was and who was throwing it. It is incredibly cleverly written, with all those twists and turns included yet none of them feeling overly contrived and placed there to throw the reader off the real trail.

It isn’t a surprise to me that The Expats is a New York Times bestseller. While it won’t appeal to everyone, as it isn’t laid out in a nice, neat package that goes from point A to point Z, I enjoyed it. The parts that were potentially flawed or inaccurate aren’t crucial to the story of Kate, in my opinion, and I was able to overlook them without issue, from some of the banking security to the CIA itself and the work it does. But that’s why this is a work of fiction, right?

In the interest of full disclosure, I was provided with a copy of “The Expats” for review purposes. I was not compensated in any other way, and all opinions remain my own.

Written by Michelle who read this as part of the From Left to Write book club she belongs to, where the members write blog posts inspired by the books they read rather than straight reviews. See how The Expats inspired her on her blog Honest & Truly!, and follow along on Twitter where she is also @HonestAndTruly to see what else she finds inspiring.

« What’s On Your Nightstand, January 22
The Last Runaway »