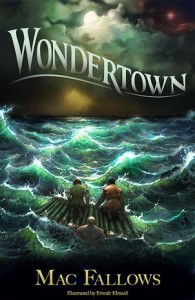 Wondertown by Mac Fallows is different from most other YA fiction. Not only is it only available on the iPad – which isn’t so unusual these days – but it is a musical book with twelve songs interspersed throughout the book. It’s almost like a musical play in a book, as the songs tell the story of the action happening and are sung by the characters of the book, with you choosing whether to play them or not.

The book itself centers on eleven year old Neil Abbott who doesn’t fit in with his world, much to his mother’s chagrin and his father’s shame. The book takes place entirely over a weekend visit to his grandmother’s, one his father hates making each weekend and seems to be a relief to his mother who is caught in the crossfire amongst all members of the family. Once he enters the seaside town where his grandmother lives, Neil ceases being Neil and instead is known by the nickname Rabbit, one he’s had since he was a baby.

On this visit, Neil/Rabbit asks his grandmother if she thinks he’s normal, and she proceeds to spin a story of long ago in Wondertown where the original Rabbit overcomes many obstacles and travels across five very different parts of the world to free the only friend he’s ever made. The story mirrors Neil’s life, with various characters representing those in Neil’s life.

The story of Wondertown truly draws you in,  a magical and different place from what exists in our world where each kind of person keeps to his own places with his own superstitions and prejudices. The only commonality is the once in a generation fear that the Night Hawk will take one of their girls for his sacrifice. The story Neil’s grandmother weaves could almost be its own book, much like the story of The Princess Bride the grandfather tells in the movie of the same name.

The “real” story of Neil and his interactions with his grandmother and parents is far more disturbing. Though the book is recommended for ages 12 and up, I would be hard-pressed to let a 12 year old read it. There are several places where Neil’s father is so negative and so nasty towards him that I would want to shelter my child from that treatment. I don’t want my children knowing that there are family relationships so dysfunctional and hateful. I’m trying to keep that innocence a little longer.

As an adult, I still enjoyed reading the book myself, eager to see how Rabbit would get through the next adventure and – like Neil – certain that his grandmother has painted everyone into a certain role and place in the story, only to be pleasantly surprised by the twists and turns.

The end of the book isn’t neat and tied up. It cries for a sequel, not just in Wondertown but in Neil’s own life, and I hope that there is one forthcoming. Neil’s talent of knowing what someone is thinking or what has happened to them just by touching an object they once owned was hardly touched and deserves far more exploration, as does his grandmother’s talent for predicting weather. And the fate of Wondertown and Rabbit has been left hanging in the balance to some degree, as well. I would have preferred a little more completeness for both of these for it to be a truly satisfying ending.

The songs were the most unique part of the book, although there is also an Wondertown eBook available without the musical portion. You can choose to play them or not, and when playing them, they continue to their conclusion as you turn the pages, so that you can listen to them as you continue to read, something I appreciate. Some of the lyrics were difficult to understand, and the end of the book includes the lyrics for each of them, which I found enlightening and helpful. I can see this being a trend for books going foward, as a soundtrack was a nifty addition.

All in all, I enjoyed the book, as disturbing as some parts of it were. And when Mister Man is just a little bit older, I can imagine that he’ll enjoy it, too. I appreciate finding books that celebrate our differences and give hope from them, a message I try to have sink in with him on a daily basis.

In the interest of full disclosure, I received a copy of “Wondertown” for review purposes. I was not otherwise compensated. All opinions expressed remain my own.

« A Bit of Applause for Mrs. Claus {with Giveaway}
Following Atticus »