I still remember when I first discovered Dorothy Sayers. I was at a conference in Pasadena, and passing a free afternoon perusing the local second-hand bookshops. I was in the mood, I remember, for Victorian literature, so I can’t imagine why the salesperson handed me a copy of Five Red Herrings

, but I’m thankful he did. I devoured that classic tale in which at various points every single suspect seems guilty, and went back looking for more.

Dorothy Sayers was a fascinating person. A strong Christian, she nonetheless wrote the  character for which she’s best known as agnostic, saying that “Lord Peter couldn’t detect the presence of a soul.” She was a copywriter and editor at a time when most women didn’t work, she wrote essays, plays and poetry in addition to detective novels, and she was proudest of her work in translating Dante’s Divine Comedy into English.

I love the Lord Peter books for many reasons, but one of my main reasons is that they represent literary fiction. Rather like PG Wodehouse, Sayers’ characters are constantly quoting. Her dialogue is clever and fun to read, and her characters have well-developed senses of humour, even as they are serious when situations call for it. And her characters are fully fleshed-out and well developed. I feel I’d recognize Harriet Vane if I met her on the street, and I know I would love to sit down and talk to her.

So why am I telling you all this? Bourbon Street books have re-released the four Lord Peter and Harriet Vane books; Strong Poison

When they arrived at my house, I have to admit I danced about hugging them, while my daughter laughed and said she could now picture me at 8. The new covers are lovely, especially Have His Carcase (pictured above) and Gaudy Night

. They are so much better than the covers of the Avon Books series. Those covers looked cool–very art deco and all–but the illustration on each actually showed the solution to the crime. Not cool, Avon. The Bourbon Street Books’ covers have beautiful fonts and gorgeous black and white photos of the time period, and give nothing away as to plot. (Seriously, Avon?) 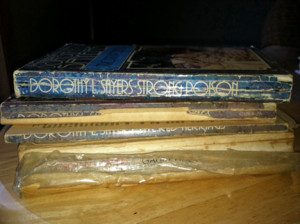 Here are my old copies. You can see why I was happy to get new ones.

: We are introduced to Harriet Vane, a husky-voiced dark-browed young woman who writes detective novels and is on trial for the murder of her former lover. Lord Peter falls in love with her and manages to find out who really committed the crime. (no I’m not giving anything away. First of all, the book was written in 1930 and chances are good you’ve read it already. Secondly, I’ve already told you there are 3 more Harriet Vane novels, not to mention several short stories!) This book has a really fun, convoluted plot (I do love a nice convoluted plot!). I love the character of Miss Climpson, and her strong Anglican values and clever mind.

: Harriet is on a walking tour when she discovers the body of a young man lying on top of a high boulder with his throat slit. She stays on at Wilvercombe and Lord Peter joins her, and together they work together to solve the case, in a way that is nothing short of brilliant. The two have developed a real friendship at this point, and I love the scenes of the two of them together, but Harriet still refuses to marry him.

: considered by many to be Sayers’ best novel. They may be right; I don’t choose favorites. It is a great book. Harriet is off at Oxford this time, trying to figure out who’s leaving all these horrible poison-pen notes about the place and trying to drive young women to suicide. She dithers back and forth with herself about whether or not to marry Peter, and sometimes you want to slap her, but frankly that’s exactly what a real-life Harriet would have done. Not only is there a great plot, but all sorts of reflections on marriage and traditional roles and women’s work, not to mention the fun character of Lord Peter’s nephew Gerald, who is quite irrepressible and lots of fun. Blissful sigh…now I have to go read my new copy. (I’ve just read the first two, although Jennifer and I agreed that I wouldn’t reread them just now because of the enormous stack of books I have to review. But the new books are so beautiful!)

: In Britain, there’s a saying “busman’s holiday,” referring to the bus driver who goes on his holiday by bus. In other words, even on your vacation, you’re doing the same thing as you would every day. In Busman’s Honeymoon

, Peter and Harriet are on their honeymoon at last (after a hilarious description of the wedding written by Peter’s mother) but unfortunately, their new house contains the dead body of their landlord. This one is a bit sadder than the others, and may be my least favorite of the 4.

I assume I’m preaching to the choir here, but possibly there are some of you who haven’t yet read Dorothy Sayers. If you haven’t, Strong Poison

is a lovely place to start. (Or, really, anywhere) If you have, and your old copies are as dog-eared and cover-missing as mine, now’s your chance to pick up some lovely new copies. Regardless, enjoy.

« Ninjago Graphic Novels: Tomb of the Fangpyre
Join me and Sony in an online book club »