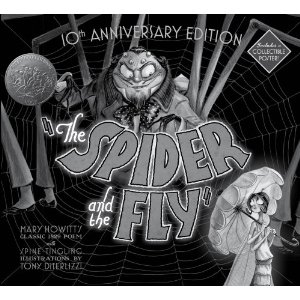 “Will you walk into my parlor?
said the Spider to the Fly,
“‘Tis the prettiest little parlor that you ever did spy;
The way into my parlor is up a winding stair,
And I have many curious things to show you when you are there.”

So begins the 1829 poem by Mary Howitt, and it goes on to tell the cautionary tale of a cunning spider who finds that flattery can indeed get you what you want when a dainty fly eventually falls into his trap. When you combine the original 19th century poem with the illustrative stylings of Tony DiTerlizzi, you get the amazing picture book The Spider and the Fly, which just happened to snag a Caldecott Honor in 2003.

I’m finding it hard to believe, but this book that has been a favorite of mine for a bit of a dark reading experience with children, is celebrating its 10th anniversary this year. In honor of this fact, The Spider and the Fly is being re-released with some new illustrations and a newly designed book jacket that opens to become a poster on the other side. That cool poster highlights the vintage film feel of the book, as its made to look like an old-time movie poster. This fits in well with a book that features pages of text resembling silent film screenshots!

I remember getting this book when it first released in 2002. I had a two year old son, and I taught a class of four year old children, and at first I thought this book would have no place in either of those worlds. Then I rethought my original assumptions, and I soon found that this story goes over quite well with four year olds, despite its more formal language and darker tone. But, it’s important to note that this is not your typical children’s book, as the note from the spider says at the end of the story: “What did you expect from a story about a spider and a fly? Happily ever after?” Though the characters are anthropomorphized in the story, they are indeed, still a spider and a fly– a hunter and his prey from the world of bugs.

There’s something about the fall season that seems perfect for the re-release of The Spider and the Fly, and my kids have already been enjoying the new version that has made its way to our bookshelf. Have you enjoyed this book since its debut a decade ago? I’d love to hear your opinion in our comments section.

Dawn and picture books go together like PB & J (or PB & Nutella in her house if it’s Friday!) When she’s able to step away from her roles as teacher and mom, she tries to write a wee bit on her blog, my thoughts exactly.

« The Witch of Babylon {Review & Giveaway}
The Mark of Athena, book 3 in Heroes of Olympus »