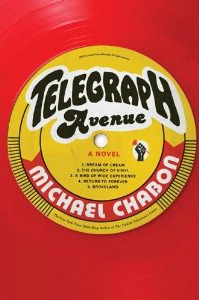 Michael Chabon is one of those authors I’ve been meaning to read. He’s written many well-known novels, and he’s even been awarded the Pulitzer Prize, yet I hadn’t read any of his works until now. His latest novel is Telegraph Avenue, an ambitious story spanning more than 400 pages with a cast seemingly almost as large.

Okay, perhaps 400 characters is a bit of a stretch, but as the novel opens, each scene introduces several new people at a time, and some scenes travel with these characters a couple decades back in time. At the heart of the novel are Archy Stallings and Nat Jaffe, friends since childhood and business partners in adulthood. Their used vinyl store Brokeland Records serves more as a community meeting place than an income generator for the two, but the business end is facing its biggest challenge yet in the impending construction of a records megastore being opened in the neighborhood by an ex-NFL player. Archy and Nat’s wives have a longstanding friendship and partnership as practicing midwives in their Berkeley, California, area, and unfortunately they, too, face a professional challenge that tests both their ability to keep doing the work they both deeply value as well as their friendship.

If those weren’t enough plot lines, add in a decades-old crime committed in the Black Panther circle, the reappearance of a deadbeat dad who is desperate to reignite his career as a Blaxploitation movie star, the surprise arrival of a teenage son who wasn’t completely unknown but never openly acknowledged, and the death of a father-figure whose impressive record collection only slightly outranks his collection of outrageous suits. Honestly, the creativity in character development present in this epic novel is beyond incredible!

Chabon doesn’t back away from critical exploration of heavy topics through his characters’ thoughts and actions. With a diverse cast of characters, the discussion of race and race relations is ever present, either directly or indirectly, in much of the narrative. In the side story of Archy and Nat’s wives midwifery practice and the difficulty they face being accepted by the medical community, I was awed by Chabon’s ability to beautifully portray a perspective with which I have personal experience.

I have to admit that I had a difficult time keeping track of the many characters in the beginning, and I wasn’t quite sure how they related to each other. I was ready to give up, not because I wasn’t interested, but because I was frustrated by my own inability to keep everything straight. After about 150 pages, the lines were starting to get more clearly drawn, and I was glad to have stuck it out. Chabon clearly has the English language under a magical spell, for the words will do whatever the heck he wants them to, in ways that most people would never have imagined possible. Even as I struggled to make sense of some passages, I couldn’t help but be awed by his brilliant mastery of the words.

Sure, the cast is huge here, and the stories are nothing less than sagas, but it was a completely satisfying read for me. Readers should be prepared for a time commitment when they pick up this heavy book that includes one chapter that, no joke, is twelve pages but only one sentence long. Telegraph Avenue is not a light read by any means, but is undeniably entertaining.

I’d love to hear from other readers of Chabon’s previous novels. Hit me with a comment to share your experiences!

Dawn doesn’t like giving up on a book, even when it’s more about her own comprehension skills than the writing. She can sometimes be found offering her own musings on life at her blog, my thoughts exactly.

« Being Visual: Raising a Generation of Innovative Thinkers
Gold: A Novel »