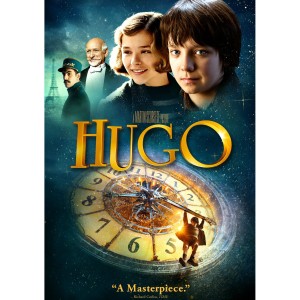 I was very excited to learn that the book The Invention of Hugo Cabret was going to be made into a movie. The book, which received awards for its beautiful illustrations, was both well written and a visual gift to the reader. In addition to feeling that the movie would be visually appealing, I was also looking forward to the character of Hugo being played out on the screen.

Our family wasn’t able to see Hugo in the theater so we were all very excited when it was released on DVD. As soon as the movie began, we knew the opening scene would have been amazing to see in 3D! It reminded us of some of the scenes from The Polar Express. This was a welcome sight, as the book has such amazing pencil illustrations intertwined with the text that the movie needed to begin on a very visual note in order to grab the audience – and it did!

The movie closely followed the story from the book – Hugo Cabret is an orphan who winds the clocks in the Paris train station. He has inherited an automaton (metal man with some special feature) from his father, which Hugo is trying to rebuild both out of curiosity and as a tribute to the memory of his father. In order to survive, Hugo must steal food, hide from the station master and keep the clocks running. Hugo’s most prized possession is the notebook which holds his father’s drawings and notes. During his adventure, Hugo also meets and observes a number of interesting people while living and working at the train station.

Both the movie and the book did a wonderful job of explaining how Hugo became an orphan, why he winds the clocks and what he is looking for in life. I will say that the book did a better job of informing the audience at the beginning; the opening of the movie had the audience asking some questions that were later answered as you watched. The movie plot is detailed enough to keep the interests of adults, while children will be engaged by the wonderful characters and quick-moving events. My son and I had read the book prior to the movie; my daughter and husband had not – and we all thoroughly enjoyed the film!

My son and I both felt that the movie was able to add some depth to some of the storylines. When you read the book, each person is left to their own interpretation of the illustrations that are included. With the movie, additional information about Papa Georges and the history of film-making are highlighted allowing the audience to have a deeper understanding of both.

Another very welcome feature of the movie was the inclusion of some characters that were not met in the book (although I wish the producer would have written in the character of Etienne who was to become a good friend to Hugo in the book). The casting was wonderful. I thought that Asa Butterfield who portrayed ‘Hugo’ came right off the pages of the book, and Ben Kingsley did an outstanding job as ‘Papa Georges’.

There were a few events that were changed in the production of the movie, which is usually the case, but they really didn’t take away from the story. In the movie, the station manager finds that Hugo’s uncle has died, and then wonders why the clocks are still running; whereas, in the book, the station master is not aware of this until the end of the story. The movie also over-dramatizes Hugo’s escape from the station master, and leaves out some events from the book that helped the reader to better understand Hugo’s brave nature and resourcefulness (for example, an injury to Hugo’s hand is not shown in the movie but is a key event in the book).

One of the main items we loved about the movie was that it was extremely engaging whether you had read the book or not. After the movie, my daughter was very excited to read the book, and my husband and I were motivated to visit Brian Selznick’s website to learn more about Georges Méliès and automatons. Although The Invention of Hugo Cabret is a fiction book, much of the story about Georges Méliès is very true and can be found at The Invention of Hugo Cabret website. Mr. Selznick had seen Méliès’ first movie A Trip to the Moon when he was younger and thought that he would like to write a story about it someday – that story is “Hugo Cabret”.

We would all highly recommend both the book and the movie – and if you’ve seen the movie but have not yet read the book, make sure to get it on your summer reading list!

Guest contributor Jacquie lives in Kansas City with her husband, 2 curious kids and a very loving dog. You can usually find her reading kids lit, baking and exploring new places with her family. She publishes a travel site that features educational adventures in Kansas City, and blogs about books, travel and fun ways to learn at Edventures with Kids.

« After the Fog
Shadow on the Wall: Book One of the Sandstorm Chronicles »