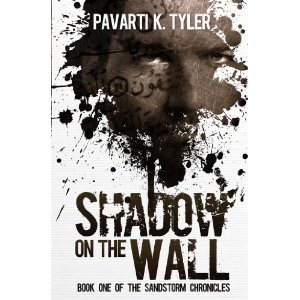 Shadow on the Wall

is like no other book I’ve ever read. Set in Elih, Turkey, it follows the story of Recai Osman, an extremely rich young playboy. His father founded a business that helped build the city from the foundations up, and he was instrumental in setting in place a system of loans to the needy that have helped countless people get established. But he disappeared years ago, soon after the death of his wife, when Recai was only 8.

The story opens with Recai getting spectacularly drunk and waking up in the desert. Disoriented and far enough away from the city that he doesn’t know which way to go, he takes off his shoes and begins to walk, feeling the grains of sand between his toes. (Which, yes, is nice, but those sands are burning!) Hours later, near death from exposure and thirst, he is rescued by a Jewish man who takes him home.

The city of Elih is at this time controlled by a mafia-like Islamist morality police who rule through terror, exortion, and even rape. When confronted with them face-to-face, Recai realizes he must fight them, and that as a rich business-owner, he is a position to do so. He morphs over time in a sort of super-hero, who appears out of the sandstorm to rescue women being attacked by these morality police. In a sort of mystical way, sort of a magic realism with Islamic overtones, the sand calls to him and changes him in moments of need.

If you are catching echoes of Batman in this story, it’s not accidental. Author Pavarti Tyler intentionally set out to write a sort of Muslim Batman, and the name of the city of Elih is Batman in English. (I know, fun!)

Shadow on the Wall

is fast-moving and gripping. There’s friendship and enmity between different people groups and religions; there are men who support strong free women and those who oppress all women. Given that it deals with a morality police gone awry who rape women, and in particular one horrible man with a snake tattooed round his neck, it’s not surprising that there’s some graphic violence in it. It’s a disturbing book. But what I really liked about it was its focus on normal people, everyday Muslims and Jews, men and women, living in what is sometimes an uneasy harmony but, in the main, just wanting peace.

It’s also the first in a series, and I’m planning to read the rest.

Elizabeth has been to Turkey, although she doesn’t remember it since she was a baby. She also has lived in other far-flung parts of the Arab world. Read more at her blog Planet Nomad.

« Hugo: Books on Screen
The Singles »