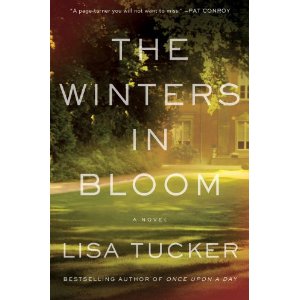 I looked forward to my second experience with a page-turning character-driven novel by author Lisa Tucker when I downloaded The Winters in Bloom from NetGalley. The press blurb describes it as her “most optimistic work to date.” Generally that might be construed to mean that it was an optimistic undertaking, but knowing Lisa Tucker’s themes, and then taking in the follow-up sentence clarified that it meant hopeful: “This enchanting, life-affirming story will charm readers and leave them full of wonder at the stubborn strength of the human heart.”

Before I go on, I’ll clarify. The characters in Lisa Tucker’s books have a disturbing yet oddly familiar and compelling dysfunction to them, as I discovered when I devoured The Promised World (linked to my review) two years ago. When I started The Winters in Bloom I didn’t see much difference in tone.

Kyra and David Winter are both hiding something. We don’t know what, and neither of them know their spouse’s secret either. However, it’s something so big, so heart-wrenching, that before they got married, they decided not to have children. However, they later decided to have a child. Their six-year-old son Michael disappears from the backyard one afternoon. They’ve tried to protect him from everything, because they know that they don’t deserve a child and so they aren’t at all surprised that they’ve lost him.

I know that many mothers can’t bear to read about the death or disappearance of a child. I am all-for spoiler-free reviews, and I don’t think I’m ruining anything by saying that he does return, because the mystery is not whether or not he’ll return, but who took him and why.

As the story of the effort to find him is told, we also learn more about David’s and Kyra’s pasts. They have indeed both experienced horrible events for which they blame themselves, rightly to an extent, though they each should have let go and forgiven long ago.

So, yes, in the end I saw The Winters in Bloom as optimistic and life-affirming as promised (though delivered in a darkly dysfunctional sort of way), because we all either have skeletons in our closet or certainly have a family chest full of secrets. The way we handle those secrets affects our ability to forgive — ourselves and those we love — and forgiveness or the lack thereof contributes to our peace of mind.

Kyra and David Winters experienced tragedies before they met, and tried — fruitlessly — to protect themselves from future misfortune. When it hit them, as they always knew it would, they bloomed as they worked through it together.

I recommend this character-driven suspenseful story, and since it’s relatively short (288 pages), it’s the kind of book that you might just read in one sitting because you will keep turning page after page after page as more and more of the story is revealed.

Jennifer Donovan hopes her skeletons don’t come back to haunt her. She blogs at Snapshot about her perfectly imperfect life.