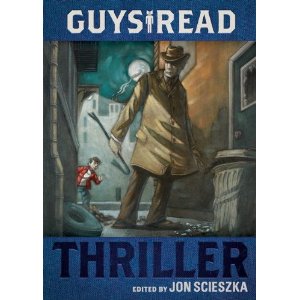 Guys Read: Thriller is the second in a series edited by Jon Scieszka (following after Funny Business, which I rated as a 5 Star Read). The goal is the same — to bring 10 stories in one genre from a veritable who’s who in children’s authors.

The “thriller” genre is a little broader than the humorous stories in the first volume, but they are all suspenseful in some way. The majority are ghost stories, with four of them being honest-to-goodness ghost stories (or the case of a mistaken ghost). There are also a few real whodunnit mysteries, a monster, an alien, and a pirate crew. I like the fact that the tone and subject is so different from story to story. Because of this, all kids probably won’t like all stories equally, but perhaps they’ll be exposed to a genre that they had avoided before, such as the more realistic “Pirate,” or the heartfelt “Believing in Brooklyn.”

My favorite story is probably “Believing in Brooklyn” by the heretofore unknown to me Matt De La Pen~a. There is a real element of suspense as the reader and protagonist try to figure out why all these mysterious magical things are happening, but the main character, Benny, is fleshed out so well as a nice kid who is worried about his grandmother and carries a bit of the weight of the world on his shoulders, that he’s stuck with me.

Anthony Horowitz’s “The Double Eagle Has Landed” is a classic heist thriller that kept me turning pages and smiling at the narrator’s strong and wry voice.

These stories are a little longer, most between 20 – 30 pages, which is a just-right length in my opinion. They are long enough to really challenge and engage a reader in a more in-depth story, yet still holds the appeal of a short story collection.

If the pattern holds true, I guess we can expect the 3rd volume in September 2012, but I wouldn’t mind if it came out sooner. The Guys Read Website indicates that the next up in the Guys Read Library is a volume of Non-fiction, followed by Sports stories. Sounds good to me!

CONTENT NOTE: Ghosts and ghouls aside, this collection is not overly gruesome or crude. It’s a solid middle-grade read that will appeal to boys and girls who are fans of this genre (even though the main characters are all boys).

I am very happy to be able to give away a copy of this book to one of you. It doesn’t publish until 9/20, so you can take advantage of the low amazon pre-order price while you wait to see if your number is drawn. Just leave a comment if you’d like to win, and we’ll announce the winner on 9/28. This giveaway is closed.

The winners of the What’s the Big Idea? workbooks are

Jennifer Donovan is a reader and the proud (and still pinching-herself-surprised) mother of two readers, one guy and one gal. She blogs at Snapshot.

« The Winters in Bloom
Eye-Catching Books for Children »