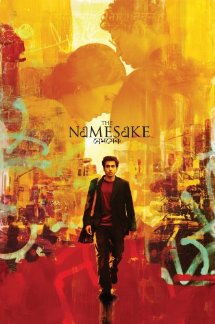 I saw The Namesake back in 2007 when it first came out. A local indie movie theater had a mid-morning showing meant for moms to take advantage of their children’s day at school, so some friends and I chose to experience some culture.

I like movies, but not necessarily artsy or foreign films. My movie choices are probably a lot more low-brow than my reading (which isn’t so high-brow in itself), but I had heard some buzz about this, and since I’ve always appreciated literature written by and about immigrants, I thought I’d try it.

The movie reached me. I liked it a lot. Kal Penn captured my heart as the first-generation American-born Gogol Ganguli.

I don’t think I knew that it was a book at the time, but it’s been on my “to read” list for a while. I finally read The Namesake by Jhumpa Lahiri this month, and then I watched the movie again.

As I was reading the book, with the movie viewing from almost 4 years ago in my mind, I thought that the movie was a pretty good assimilation of the novel. I left feeling like the movie was a complete picture of a family, and in my mind related it to the character-driven novels I like so much — that bore others because “nothing happens.”

I watched the movie again recently, just days after finishing the novel, and it still held up. Of course I made comparisons (why the change in setting from Cambridge to New York??), but I think that the movie did a great job of telling the exact same story with exactly the same feel of the book. There are also many times in which dialogue and nuance are taken directly from the book. One of the things that amazed me in the book was the way that Lahiri writes a scene, and somehow this came across on screen too (although the book is truly fantastic).

I was surprised how quickly the movie moved, covering 6 or 8 years within the first 20 or 30 minutes. It seems a bit jumpy after having read the book (which also moves forward through the years fairly quickly), but I don’t remember feeling confused by it the first time I saw it. The director, Mira Nair, actually adds in some wonderful scenes that I thought enhanced the story.

Both the book and the movie are a wonderful story of immigration — those who choose to come to America, and those like Gogol and his sister who are born there and straddle the line between their parents’ past and their own future, which gives it the feel of a coming of age story. They each have strengths — I especially adored the portrayal of Gogol’s mother Ashima in the movie — and they are both worth experiencing.

You can read my review of the book the Namesake at my blog. I highly encourage you to experience this story through either the book or the movie.

Jennifer Donovan loves the written word and loves seeing stories played out on film as well. She blogs about other things she loves at Snapshot.