The world may have royalty on the brain today, as one young woman will soon be called a princess after the British royal wedding.

In my own little world as the mother to a young girl, I’m aware of how much the concept of “princess” has been embraced by companies looking for my daughter’s attention, as well as the contents of my wallet. One factor in this “princess culture” that bothers me (and trust me, I have a few) is the complete fictionalization of a role that has been quite factual throughout history. With a six-book series by Shirin Yim Bridges entitled The Thinking Girl’s Treasury of Real Princesses, this purely fantastical image can be added to with true stories of real-life princesses from ancient Egyptian times all the way to 17th century India. 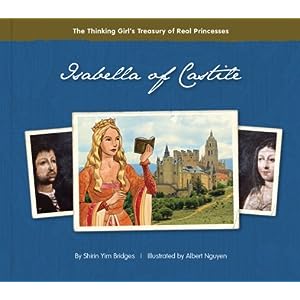 In Isabella of Castile, the story of the famous Princess, then Queen of Spain is told, and I knew of her as the wife of Ferdinand, mother of Catherine of Aragon (the first of Henry VIII’s multitude of wives), and the financier of Christopher Columbus’s expedition to the New World. What I hadn’t known, though, was just how much power she truly had, and the active role she took in securing her own future. 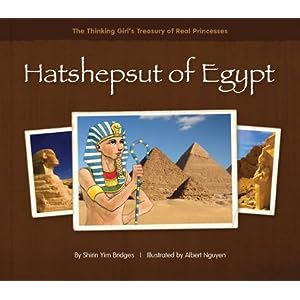 The first woman to be named Pharaoh, King of Egypt is also featured in the book Hatshepsut of Egypt, and I was amazed to learn of her time of rule. Shamefully, her story is not widely known, the daughter of a Pharaoh whose royal status reached all the way to King! Twenty-two years of her reign saw peaceful and prosperous times for Egypt, and several of the monuments she erected still remain. 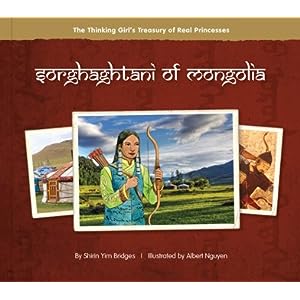 Genghis Khan may be history’s most well-known Mongolian figure, but the wife of one of his (many!) sons, was a princess in her own right. Sorghaghtani of Mongolia proved herself to be an intelligent, successful and respectful leader when she was named the official ruler of her husband’s lands upon his death.

All of the books share a format that includes a list of hard-to-pronounce words at the beginning of the book, even giving website suggestions to hear audio of the correct pronunciation. A timeline that includes all six princesses is featured in each book, and a few connections are drawn among the six figures in some of the books. Along with personal histories of each woman, much historical context is presented, as well as descriptions of the clothing and typical diets for royalty at the time.

I cannot wait to share these books with my own daughter when she’s a little older, and my only critique of the series is the gender-specific title that most likely will not appeal to boys in the 9-12 year old suggested age range. I have already shown the books to my own ten year old son, with the instruction to ignore the series title, because I know the informative and entertaining tone of these historical texts will appeal to him. I’m also of the opinion that these types of books should be read by both girls and boys to show that regardless of their rare appearances in the traditional history texts, women have in fact played great roles throughout the history of our world.

The entire series of The Thinking Girl’s Treasury of Real Princesses is simply stellar and highly recommended. Nonfiction books can sometimes be a bit dry, but all of these books will keep young readers’ interests and be informing them of some historical figures who deserve to be known.

Dawn may not be a historical buff, but she loves to expose her kids to all sorts of literature. Their own stories are told on her blog, my thoughts exactly.