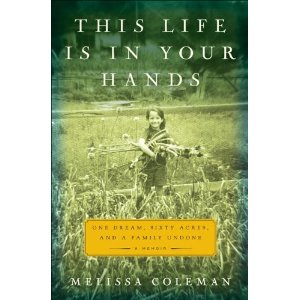 I picked up This Life Is in Your Hands: One Dream, Sixty Acres, and a Family Undone one afternoon, planning to read just a little bit in a few minutes of downtime. Instead, I was drawn in and kept reading and reading and reading — through baseball practice, and into the evening.

When I think of going “off the grid,” I immediately think of something going wrong. Not to make a blanket judgment, but generally those who exercise such an extreme divergence from “normal life” end up facing some disappointment. And indeed, as the subtitle hints, it involves “a family undone.”

This is not a typical memoir. For one thing, Melissa Coleman starts the story of her parents and their life trying to live off the grid in Maine in the 70’s when she’s still in the womb. Obviously she cannot remember that time in her life, but it’s apparent from her use of quotes from others who were adults at that time, that she has done her research. So instead of reading like a straight memoir which is very much centered around the author, this reads a little bit more like investigative journalism, but with the added bonus of Coleman’s presence, both as that young child and as the adult who is now writing with some hindsight.

Elliot Coleman, Melissa’s father, is truly a pioneer in organic farming. You may or may not agree with the burden that his dream put on his family, but his thoughts about the food we eat and our dependence on other people to provide us with the food is right in the mainstream today.

Coleman does not write with judgment, either on her father or the rest of the world who doesn’t choose to live that way, although she does contrast his choice quite pointedly with that of his wealthy parents who smoke and drank to “soothe some unnamed feeling of discontent created by the relative ease of their existence” (p. 32 ARC).

That has to make you think, and makes Coleman’s choice to do something for himself — to work hard to provide for all his family’s needs — seem natural.

The writing is absolutely riveting and it makes for a great read for anyone who likes memoir, especially those who might be interested in organic farming and natural foods. But because of her chosen style which reads as simply reporting a chronicle of her life, this might also appeal to those who tend to avoid more personal emotionally-driven memoirs.

Jennifer Donovan doesn’t fancy herself a video personality, but doesn’t mind sharing a book review vlog now and then. She’s much more comfortable behind the keyboard blogging here and at Snapshot.

« Triangle: Books on Screen
Song of the Silk Road »