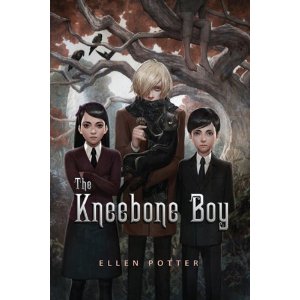 This book promised to be delightfully quirky, and it is! I had not ever read anything by Ellen Potter, but she was definitely on my radar after reading a few reviews of some of her earlier works.

The Kneebone Boy is the story of the Hardscrabble children. Otto, Lucia, and Max range in age from 13 to 10. Their mother “went missing” years ago, and their father travels frequently for his work as a royal portrait artist. When their father goes out of town on this particular trip, they are sent to London to visit their cousin, and that’s where the adventure begins.

When I truly truly love a book (as I do this one), not only does it get preserved forever on our 5 Stars Read page (as this one will), but I find myself a bit speechless about it. I think it’s in part because I like to be vague so that the reader can discover the joy for themselves. But it’s also because happy feelings in my heart don’t translate to the page well. So be it.

There are one or two uses of a mild swear word, but it is pretty much free of objectionable content for kids in 3rd or 4th grade and up. I think it’s a perfect fit for an older middle-grade reader, which I appreciate as the parent of an older middle grade/young YA reader. I love that a clever, thoughtful, funny, adventurous book like this is available to tempt children to be children a while longer, instead of teen wannabes.

Jennifer Donovan is not a teen wannabe. She blogs at Snapshot about her soon-to-be teen daughter and her 6-going-on-12-year-old son.

« Mailbox Monday – October 4
The Kids Are All Right »