In his history class at school, my son watched “The Scarlet Pimpernel” as part of a unit on the French Revolution. I had a vague memory of seeing a portion of the movie many years ago but had never read the book; so, on a recent trip to the library I picked up a copy of Baroness Orczy’s novel and quickly devoured it. 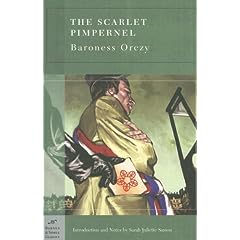 The year is 1792 and the Revolution is at its bloodiest with the guillotine enforcing and defining the Reign of Terror. The only hope for the aristocracy to escape such a brutal death is through the exploits of the elusive Scarlet Pimpernel, an English master of disguise who has captured the imaginations of English and French alike. To the Englishmen, he is their hometown hero and a source of great pride; to the French noblemen and women who owe him their freedom, he is a miracle worker; to the French revolutionaries he is a thorn in the flesh and thus they seek his capture at all costs. Their only clue is his calling card featuring a red flower, the scarlet pimpernel.

The novel introduces its readers not only to a horribly brutal time in history, but also to the unforgettable characters of Sir Percy Blakeney, an extremely rich Englishmen known only for his sense of style and his lack of intelligence, and Lady Marguerite Blakeney, a beautiful Frenchwoman, former actress, and Sir Percy’s wife, known for her cleverness and impeccable taste. Their adventures, as well as those of the Scarlet Pimpernel, make for an entertaining story that is both humorous and suspenseful.

In short, I loved The Scarlet Pimpernel and I think you will as well! I am now eager to see the movie again….