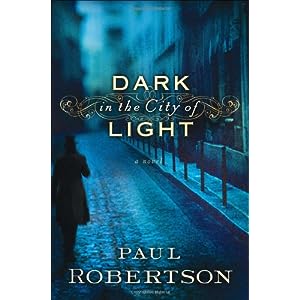 Paul Robertson certainly could not be accused of exploiting one particular genre. No niche for him. His previous novels (linked to my review) centered around a DC bookseller in According to Their Deeds, a city council making a decision on a municipal project in Road to Nowhere, and a wealthy beneficiary embroiled in politics and murder in The Heir. His newest novel, Dark in the City of Light, takes place in Paris in 1870s at the brink of the Franco-Prussian War. From the publisher’s description:

What Evil Haunts the Shadows of 1870s Paris?

Baron Ferdinand Harsanyi — After his wife’s mysterious death, this Austrian attaché holds control over mines whose coveted ore could turn the tide of war.

Therese Harsanyi — Swept up in new romance and the spectacle of Paris, the Baron’s daughter is blind to the dangers stalking her family and the city she loves.

Rudolph Harsanyi — Unsure whom to trust, the Baron’s son’s grief over his mother’s death twists into growing anger and a desire to break free.

As France and Prussia plunge toward war, one family is caught in a web of deceit, political intrigue, and murder that threatens to tear them apart.

I’m a big fan of Robertson’s smart wit and clever writing and I wanted to like Dark in the City of Light. Don’t misunderstand, I did like it but not nearly as much as I anticipated. The premise is interesting and the history obviously well researched yet through much of the novel I felt confused, in the first half particularly. The second part of the novel moved at a faster clip despite some rather too coincidental coincidences and a shifting timeline. Robertson’s beautiful prose is evident here in this novel as well, though missing some of the wit and intelligence that marked his earlier novels. His descriptions of Paris in its glory and later in its siege capture the stark contrast between the opulence and the resulting devastation. Despite the complicated plot, Dark in the City of Light is still an interesting novel and those who enjoy a historical mystery will find much to like. Personally, I still prefer his earlier novels, According to Their Deeds in particular, but Dark in the City of Light is not without merit.

Wife and mother, Bible teacher and blogger, Lisa loves Jesus, coffee, dark chocolate and, of course, books. Read more of her reflections at Lisa writes…. Lisa thanks Bethany House publishers for providing the review copy of Dark in the City of Light!

« The Center of the Universe
On Reading: The Best Things in Life are Free »