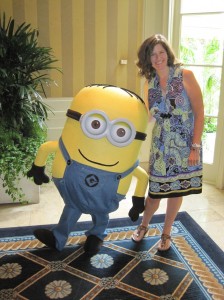 Again, I’m sort of bending the rules with this column. I was able to see a preview of Despicable Me on a Universal-sponsored Mom Blogger press junket (click through to 5 Minutes for Mom to read some more details and get a sneak peek of the fun interviews to come this week). It’s a truly great movie that I wanted to share with you here as well.

Though it’s not technically a “book on screen,” a lot of the story revolves around a bedtime story, and I’m excited to actually mention some real book tie-ins, but I will save that post for July 15 after some of you have seen the movie and will understand how cool and great these books are. 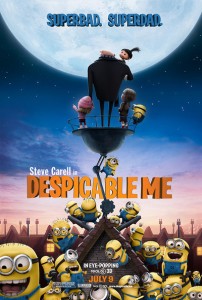 I don’t particularly like the title Despicable Me, and for that matter, I don’t think that the previews do the movie justice at all. In the previews, you will see Gru, who is trying to be the world’s greatest super-villain. That is somewhat true — he is in competition with Vector, who has done some pretty villainous feats. Those cute little yellow guys that you have seen everywhere (including in the picture with me, above), are Gru’s minions.

When Gru enlists the help of three adorable orphans to best Vector, he is unexpectedly thrown into the role of Father.

Seeing the growth in their relationship, the change in Gru, and his memories of the relationship with his mother is the heart of the story, which makes it a movie that will appeal to adults as much or more than kids. It’s a story about love and insecurity and ultimately acceptance.

There’s plenty for kids as well. The minions are adorable and funny, and the kids in the movie are totally relatable. Much of the talent from Horton Hears a Who worked on this movie, and it has a similar feel to me — funny, entertaining, but with lots and lots of heart.

It’s rated PG for “mild action and rude humor.” I found it to be extremely family-friendly. There is some cartoon action/violence that is mild, and the “rude humor” is probably from two scenes I can recall: the minions Xerox their backsides (the only movie moment that might offend at all), and in a chase scene Gru’s pants come off, revealing some silly boxer shorts. That was honestly ALL I remembered. No innuendo that is meant to appeal to adults and supposedly go over the kids’ heads, nothing that I felt went too far. Unfortunately that is not the case with most children’s films. I agree that most stuff does go over my young son’s head, but it just turns my stomach when I see animated films playing for the cheap laugh. And I got to share my thoughts with one of the producers on that issue.

If you see the movie after it opens July 9, let me know if you agree. I know that my opinions might seem biased, because I got an inside look (check out the details on 5 Minutes for Mom), but right after I saw the early screening before I even left for my press junket, I declared this in my Top 5 Children’s movies ever.

Other Despicable Me posts:

Jennifer Donovan loves enjoying a good story, be it on screen, stage or in the pages. She also blogs at Snapshot, and has been a contributor at 5 Minutes for Mom for four years.