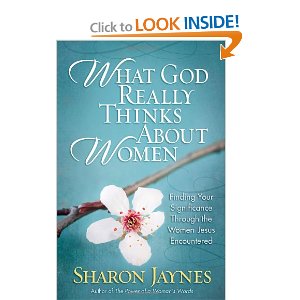 I saw a copy of What God Really Thinks About Women: Finding Your Significance Through the Women Jesus Encountered

at the Book Expo and was curious to find out what it was about. So I was delighted to have it land in my mailbox where I could read it and peruse at length.

I should start by saying that, as a lifelong Christian, I have never doubted my worth as a woman in God’s eyes. I know that there are arguments out there that Christianity has a harsh view of women and I’ve never paid mind to the arguments because I feel that they are just wanting to find ways to “poke holes” in the Gospel. I understand the reason behind their arguments, but I do believe that they are incorrect. I’ve always believed that scriptures clearly teach God’s value of female. After all – God created woman alongside man. I assume He cares about our hearts, our beings and finds great purpose and takes great delight in His creation of woman.

Still. There are arguments that in Judaism and in the early Christian church – women were treated poorly. I would say that I agree that women have had it rougher than the men. Certainly there have been abuses – and there still are! – in the way that various societies and individuals have chosen to treat and relate to God’s Woman.

Sharon Jaynes has written this book to share how much she believes that God truly does value females. She uses as her primary argument that Jesus Himself showed respect and honor to females, and included them in His following. She shares the stories of various women in the Bible to show how God has used woman in His plan. She also shares how Jesus related to individual women that He came into contact with.

As she says of Jesus:

“He did not set women free only to be quarantined in the new order called the church. He set women free to go out into the world to tell the Good News of the gospel and to work among believers to build the body of Christ. In a culture that kept women tucked away in the recesses of the home to be neither seen nor heard, Jesus pulls them from behind the scenes, positions them front and center, and shines on them the spotlight of His divine love an d calling. As the curtain of the New Testament rises, women fill the stage and take starring roles as God’s grand drama of redemption unfolds.” (pages 27-18)

Personally, I liked this book and think it serves a purpose in today’s society, to counter the argument that God has de-valued the woman. I don’t believe that’s the case. I also don’t believe that I agree with everything that Jaynes says about woman’s roles and positions today. I’m a bit more conservative than she is, but I get what she is trying to say. I agree with the message she is sharing in this book – women matter. God cares.

I’m sure this book will both raise and answer questions for Christians and others who grapple with issues and uncertainties surrounding the roles of men and women. In a way, I think Jaynes is kinda gutsy for stepping out and talking about this issue in the manner that she has chosen to do so.

Interesting thoughts to be sure!

to giveaway over at Reading to Know (my own personal blog.) Not only that – but you can enter to win this book, as well as three other resources, from Harvest House Publishers! They also just released a new DVD series by Elizabeth George based on her popular book title, Loving God with All Your Mind 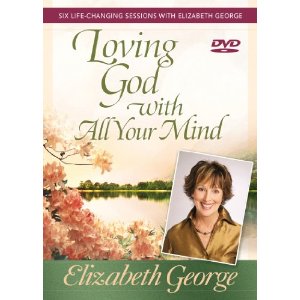 then pop over to Reading to Know and enter to win a copy.

In the meantime, enjoy asking yourself some hard questions and seeking out answers with this new title by Sharon Jaynes.

Carrie enjoys discussing topics relating to her Christian faith. She provides book reviews from a Christian worldview (quite) regularly at ReadingtoKnow.com.