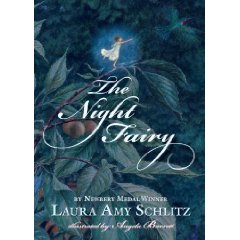 I was an unsuspecting reader. I had no idea what I was getting into when I cracked open the cover of The Night Fairy

. Laura Amy Schlitz has written a delightful fairy tale story in every sense of the word! I was hooked entirely by the opening sentences:

Flory is so tiny that she is initially mistaken as an insect by a hungry bat. Her encounter with the bat has torn her wings, making it impossible for her to fly. She takes refuge in a garden which is owned and cared for by an older woman who has a fondness for birds and keeps the bird feeder well-stocked, year round, to suit the types of birds who also might be visiting the garden. Upon her arrival in the garden, Flory meets a squirrel that she promptly names Skuggle. She and Skuggle work together to gather food (frequently obtained from the bird feeder) and try to steer clear of any unwelcomed predators (in Flory’s case, she is very anti-bat.)

At 117 pages, this is a quick read for an adult. It took me a less than an hour to devour. However, I can imagine that it would be easily stretched into a pleasant read-aloud for little girls who dream of pixies and fairy dust. Flory grows up somewhat in this story and makes a few new animal friends – and a few enemies as well. Her wings do grow back and she has the hope of flying again.

Charming. Agreeable. Unobjectionable. I simply loved it! But then, I dream that fairies really do exist. They simply MUST! In my world – they do.

I really don’t want to give away more of the story, but I do want to assure you that if you pick this book up, you will be delighted by this cozy read that comes off in a quaint, old-fashioned way. I’m impressed by the tone that Schlitz took in writing this story which makes it all the more believable. I’d say it’s probably aimed at girls aged 6 and up. I include myself in the “up” and can’t imagine that anyone who doesn’t like fairies wouldn’t like this one as well.

« Readable Classics
I Read It — April »