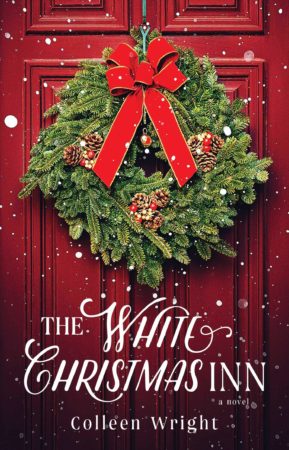 Disclaimer: I started this post mid-December, and here we are at the end of the month. However we’re still in the middle of the 12 days of Christmas so I consider to still be season-appropriate. And if you’re like me, your Christmas decorations will still be up for a few weeks.

I always like reading a nice Christmas romance at this time of year. The last few years I was lucky to listen to the Winter series by Elin Hilderbrand (reviews here, here and here) but sadly that series has ended. So instead of the Kelly family in Nantucket, I listened to The White Christmas Inn, a story about the guests at at an inn tucked away in the woods of Vermont.

It’s two days before Christmas and a blizzard has descended up on the Evergreen Inn, just in time for Hannah’s wedding to Trevor, her boyfriend of 6 years who suddenly decided he wanted to get married a few months earlier. The short notice meant not many venues were available, but in a flash of inspiration, Hannah realized the Evergreen, where her family spent many vacations, was the perfect place, with the wedding set to take place on Christmas Day.

Just after Hannah, her best friend and bridesmaid Audrey, and Hannah’s parents arrive at the inn, Hannah gets a call from Trevor – he’s not coming. Hannah is shocked by his admission that he’s not really sure if he wants to marry her. And then Audrey’s husband, on leave from the military, is trying to get to the inn from San Diego, but the storm is making that look unlikely to happen.

Meanwhile, the Evergreen’s owners, Tim and Jean, have their own problems with the wedding’s cancellation, losing income they need to keep the inn afloat. Low reservations due to a large fancy hotel opening nearby means they won’t be able to keep it open past the winter season, and tensions are high between them.

The other guest booked for the Christmas weekend is a children’s book author struggling to come up with an idea for her next book, and when the roads are closed due to the storm, a father and his 2 young daughters, an older couple celebrating their first Christmas without their grown kids, and a grouchy old Brit all seek shelter at the inn. Former owner Iris, who still works at the inn, and her grandson Luke, round out the cast of characters in this lovely novel.

Of course there are conflicts, dire circumstances, and broken hearts, but by the end of The White Christmas Inn, all issues are resolved and a few love matches have begun. While there are a couple of plot holes the size of the North Pole and major conveniences to tie things up, this novel is quite charming and a nice break from the stress of the holidays.

Notes on the audiobook: With a running time of just under 8 hours, this was a good book to listen to during the holiday season. The narrator is easy to listen to without losing my focus on the story.