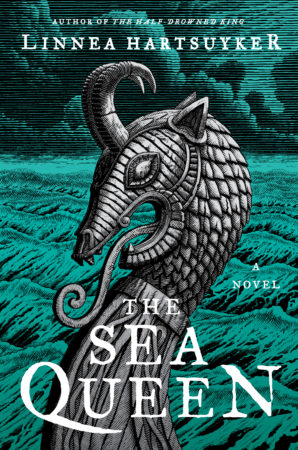 One of my favorite books of 2017 was The Half-Drowned King (linked to my review), so I was excited to see how the second part of the trilogy would hold up. Could it be as interesting and exciting? Could it equally recreate a world long lost to the mists of history, a world of Viking conquests, shifting loyalties, visions and prophecy, and females both subjugated and at the same time strong warriors? In a word, yes. I loved The Sea Queen, and I’m both looking forward to the end of the trilogy and dreading it. (And yes, I’m sure author Linnea Hartsukyer wrote all 3 parts at once, but still I wondered if Svanhild could keep being as interesting a character. She could)

This second novel opens 6 years later. Svanhild and Solki are married and continuing their sea-raiding ways, but Svanhild is still struggling for the true autonomy her soul craves. They have one son, a quiet gentle boy named for Svanhild’s father, who is ill-suited to a life of constant movement and adventure lived on the sea. Svanhild wants to settle down in Iceland, but Solvi doesn’t want to be led by his wife, and also seeks revenge for his father’s ancestral lands in Norway, and insists they continue their life of sea raids and battles.

Meanwhile Svanhild’s brother Ragnvald is now king of Sogn, the fiefdom his father lost, and still closely allied with King Harald. Harald highly values Ragnvald’s ability to strategize and win battles, and keeps him far from home, something that frustrates Ragnvald. When Sogn is threatened, his loyalties will be questioned. But as Harald strives to create a Norway united under his rule, both men will have to navigate treacherous waters, as under-kings shift loyalties and trust is hard-won and unreliable.

The storyline builds towards a battle that might end up pitting Ragnvald and Solvi against each other. The two have been enemies since Solvi betrayed Ragnvald, leaving him to die, when the two were boys. Ragnvald’s reunion with his sister, after her marriage to Solvi, is masterfully done.

I love the character of Svanhild in particular. Sometimes, historical fiction about strong women feels anachronistic, like the author imagined herself, a 20th century American with all our viewpoints and thought habits, suddenly transported in time and place. But Svanhild feels real–like we are in the head of a 9th-century Norsewoman, one who is strong and independent yes, but also facing the constraints and expectations of her time.

In short, The Sea Queen is exciting, gripping, and a great read with believable characters that exhibit real depth and personality. It’s the second part of a trilogy so yes, you should read The Half-Drowned King first, but that is not a hardship. If you haven’t discovered these books yet, you’re in for a treat!

« What’s on Your Nightstand? September 25
Game of Secrets »