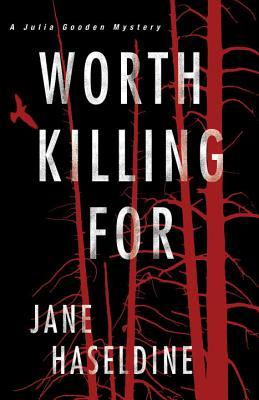 Worth Killing For opens with a young Hispanic man in search of day work so that he can pay for his girlfriend to visit the doctor. Instead, he is kidnapped and killed by a Native American man with a long black braid and a really sick penchant for hunting down his prey with bow and arrow, and photographing his victims at the moment of death, which he believes allows their souls to pass into his body. He will show up at various points throughout the book, and if you can handle him, you’re in good shape to begin.

I thought I could. I sort of read through the description through squinty eyes, which is my norm with gory bits (actually I skim them but in my head I’m sort of cringing away). I really enjoy murder mysteries but I don’t really like the gory bits, which seems contradictory, and sometimes I wonder why I like this sort of thing. This book did nothing to really explain it, which is why I’m giving it a fairly harsh review, but really it’s no worse than most of its genre.

Julia Gooden is a crime reporter called in to cover the finding of the body, which has been shot through the heart. The modus operandi links it to several other bodies that have shown up over the years. She’s allowed up close because she has developed personal relationships with several cops, including her lover Navarro. But a mysterious photographer shows up, claiming to have information about Julia’s brother Ben, who disappeared when she was 7 and he was 9. She ditches the hottest story in a while to follow up elusive clues. Don’t worry–it will all link up eventually, and Julia has a good enough relationship with her editor that all will be overlooked.

Meanwhile, her father, Duke Gooden, has shown up after 30 years. Because he’s back in town, suddenly all the bad guys are chasing Julia. In spite of her supposed smarts, she falls for the trick every time–if she thinks it might have something to do with Ben, she will go to the deserted trailhead alone, or she will visit her old childhood house. She has reason to–Ben was her hero, her protector, her idol. He was an awesome kid who did his best to make her childhood sustainable, before her father’s greed ruined it for all of them. There are ample flashbacks, told mostly from her point of view but also the occasional one from Duke, who ditched the family but rose to the high life. These fill in the gaps, explaining why people are desperate to find out information from Duke and about Duke. It also becomes more and more clear that Ben’s disappearance had something to do with Duke’s actions. Meanwhile, the body count rises higher and higher.

Worth Killing For is a plot-driven book, and the characters aren’t overly developed with the exception of Julia. It’s part of a series, but I didn’t feel I needed to have read the earlier ones to understand what was going on. It’d be a good read for an airplane or long car ride, where you want something gripping enough to keep your attention, but not too convoluted or involved. Enjoyable enough.

« What’s on Your Nightstand, March 27
The Other Mother »