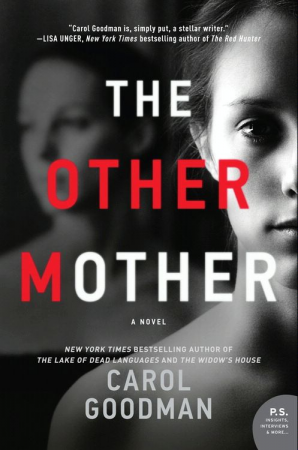 When we lived in Morocco, I used to enjoy a delicacy named msemmen, and one day I asked a friend to teach me to make it. She showed me how to form the dough into a sort of square, fold it over twice, flatten it a bit, fold it again, and so on, until the end product had many layers, little pockets that you’d fill with melted butter and honey. I know this is an unusual opening for a book review, but as I read the twisting turns of Carol Goodman’s novel The Other Mother, the analogy of making msemmen kept springing to mind. This tale of post-partum depression and OCD cuts deep and then turns back on itself, and the result is almost a fairy tale of madness, a gothic story where the reader doesn’t know who to trust to tell the truth.

At the beginning, we’re pretty sure that Daphne is telling the truth, although she’s so overwrought we’re prepared to think she could be exaggerating. She’s on the run with her 8 month old daughter Chloe strapped in the backseat, driving up to a castle set in the woods of the Catskills, a private mansion whose extensive grounds hide the mental asylum. She’s presenting herself as a single mother and qualified archivist, there to sort through a lifetime’s worth of papers of her favorite author. However, neither point is strictly true. She’s a school librarian not an archivist, and she’s on the run from her husband, whom she is convinced wants to take her daughter from her. She has in her possession 2 pieces of paper that seem to prove her point.

Daphne suffered postpartum depression after Chloe was born, and joined a support group. There, she met and befriended the thin, blonde and beautiful Laurel Hobbes, whose daughter is also named Chloe. Gradually the two got closer and closer. Daphne lost weight, dyed her hair blonde, bought more fashionable clothes. It was almost as if she was becoming Laurel. Now, she’s presenting herself as Laurel, using Laurel’s resume and ID to the author and her housekeeper. Is that a symptom of a psychotic break, or a wily way to protect herself?

She begins her work, but the stories taunt her. There’s the one the housekeeper told, about a mother looking for a lost child who leaped from the high tower where the library is housed. There’s the weird blinking light, signaling her, from the mental institute, or the way the wind plays the iron stairs until they sound like a wailing infant. There’s the weird connection she feels with a former patient, and the means she goes to in order to access the old files.

The story only gets weirder from there. See, Laurel’s dead–or is it Daphne who’s dead? And what about their two husbands, both of whom are claiming the same thing? Either Daphne is really messed up, or a lot of people are lying. You won’t know, although of course you should try to guess. If you’re like me, you’ll go back and forth several times, and still not have guessed anywhere near the whole of it.

Although The Other Mother takes place firmly in our own world, with Kate Spade diaper bags and Pottery Barn furniture, it reads in many ways like a dark fairy tale, where women and mothers in particular dance on the edge of an unknowable drop, teetering on the edge through sleepless nights. It’d be a fun book to deconstruct in a feminist lit class, although for me the ending wasn’t entirely satisfying. It’s the sort of book to read on a night with a howling wind, curled up safe but listening for that haunting, maddening tune calling you to the other side.

« Worth Killing For
You All Grow Up and Leave Me »