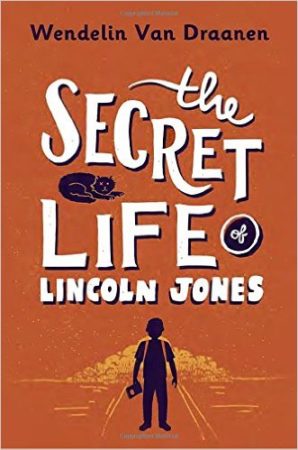 Lincoln Jones and his mom had to move away to get away from her violent boyfriend. After living for a little while with his aunt and cousin in a cramped apartment, they get their own place. It’s small, and dingy, but Lincoln doesn’t mind. He has his mom, he has his own bed, and they are safe.

His mom has a job working at Brookside Memory Care. Each day after school, Lincoln goes there to do his homework until she gets off work. The place is full of color, and sometimes the signs of crazy make Lincoln feel uncomfortable. He turns his doubts and his feelings of loneliness at his new school into stories, which explains the title, The Secret Life of Lincoln Jones. The woman who is bedridden and old but keeps hanging on as healthier roommates move in and die becomes a vampire in his imagination and his notebook.

This is a nice story with heart for all ages. Sometimes stories that deal with hard topics like alcoholism, poverty and old age end up hitting a little hard for those at the younger end of the age range, but I thought this was honest and relevant, and yet not too deep. Wendelin Van Daanen somehow manages to strike just the right tone, including humor, mystery and optimism.

Even though he doesn’t reach for them, my twelve-year-old son likes these kinds of stories, mostly when we read them together. The fact that we cared for my grandmother when she was living in a memory care facility made the story ring true to him, as well as the traditional elements of school: teachers, friends, mean kids.

« The Vanishing Year
Can Knowledge of the “Other Side” Bridge our Political Divide? »