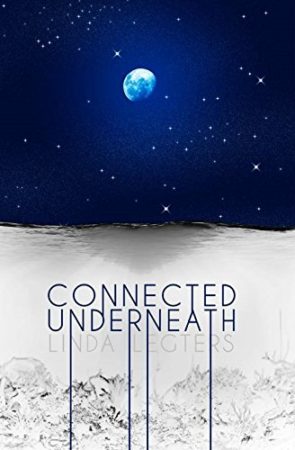 Maybe I’ve seen too many horror movies, but the title Connected Underneath conjures up images of sea monsters and submarines. Conversely, Linda Legters’ new literary novel has inner demons and a motorcycle.

Theo owns one of the last video stores in the small town of Madena in upstate New York, where secrets abound. His adopted 15-year-old daughter, Persephone, is becoming increasingly distant, and he’s not aware of the collage of tattoos spread across her back, obtained by trading sex with the tattoo artist. Unsure where to turn Theo approaches Natalie, Seph’s birth mother, who gave her up for adoption as an infant, but hasn’t told Theo the whole truth about Seph’s father.

Theo’s visit to Natalie is observed by Celeste, wheelchair-bound and confined to her home by a condition that might just be in her head. The novel is narrated by Celeste and it’s clear all doesn’t end well for those involved, except maybe Celeste herself, which makes her a somewhat unreliable narrator. Her self-imposed isolation has caused her to create a fantasy world about those she views through a vent, which makes her involvement in the final events of the story even more poignant.

Connected Underneath focuses on the secrets surrounding Seph, both those withheld from her and those she holds herself.

The characters in Connected Underneath are desperate to connect and go to great lengths to do so, even those who hold themselves at a distance from others. Maybe especially them. The prose is lyrical and moving, intelligent without being condescending. The plot moves at a quick pace toward a conclusion you see coming but are powerless to stop.

I highly enjoyed Connected Underneath and am thankful to TLC Tours for providing a copy for my review.

« Girls on Fire
A Q&A with Judith Hooper, author of Alice in Bed »