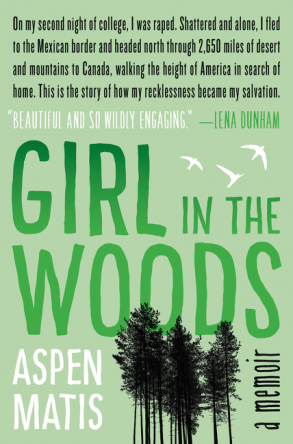 Aspen Mathis’ gripping new memoir begins with her being raped on the second night of her freshman year of college. I read it on an airplane, having just said goodbye to my daughter on her first night of college, one located 3000 miles from home. I don’t necessarily recommend timing your reading like this, but it worked out okay.

Aspen was christened Debby Parker, born to a mother who was 43 and desperate for one more child after several miscarriages. As a result, her mother coddled her, dressing her and choosing her outfits until she was in high school. They went on long walks hand in hand every evening, and Debby was shy, socially awkward and teased. Her mother was clinging; her father distant. She used to make lists of things she couldn’t do, which included wearing contacts and swallowing pills.

She leaves her Massachusetts home for a Colorado college, and the second night was raped. It took her weeks to try to get help, and by then all the evidence was gone. She blames herself, but also finds herself silenced, shut out, ignored. Her mother can’t handle the information. Her school moves her rapist to the same dorm as she’s in, so she moves out to the worst dorm on campus, one that ends up flooding with sewage, and spends most of the year in a deep depression. And so she decides to quit school a few weeks early in order to hike the Pacific Crest Trail from Mexico to Canada, alone. Keep in mind that she’s 19 at this point.

And yes, comparisons with Wild

are inevitable, but since I haven’t read the book or seen the movie (although I want to do both), I can’t speak to it. If you have, please respond in comments.

Mathis’ descriptions of the trail is worth the price of the book alone. They’re fantastic, and now I have a new goal in life. (Well not really. I have actually hiked parts of the PTC, and now I want to hike more, but I’m not going to do the whole thing.) Her depictions of lonely, star-filled nights, majestic sunrises, the pace of walking that immerses you in landscape, the scope of change from desert to snow-covered meadows–it’s amazing. These were some of my favorite parts of the book.

Mathis also describes the other hikers she meets on the trail. She hooks up for a while with a young Swiss man and begins to learn that some men can be trusted. But she’s also put herself in an environment where she’s very much in the minority as a single woman thru-hiker, and she begins to learn how to handle herself in different situations. Some of these are painful, both to live through and to read–such as a group of male hikers’ campfire talk, or another single male’s trash-talking of females when Mathis shares the story of her rape. She ends up hiking the most dangerous part of the trail alone, and indeed coming perilously close to death more than once.

Girl in the Woods

is in many ways a coming of age story, and by the end of the book, Mathis is writing with wisdom that she’s earned through her experiences and that belies her years. At the beginning of her hike, she was, well, a typical 19 year old in many ways–immature, reckless, self-centered. Although I had a lot of sympathy for her, I didn’t always like her, and rolled my eyes several times. I’m glad I kept on with the book though, because by the end I felt she was 10 years older. For her, hiking the trail was a way to both gain confidence and prove independence, after a loving but stifling childhood and a shattering and silencing rape. Afterwards, she relates to both her parents and her college in new, healthy ways. In many ways, it’s an incredible book and I found myself wanting to recommend it to different people in my life. It’s definitely worth your time.