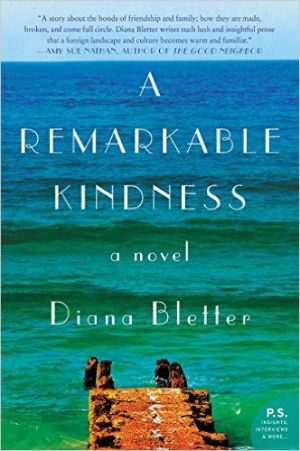 As Diana Bletter’s new novel A Remarkable Kindness begins, readers are immediately introduced to what may likely be an unfamiliar traditional ritual in the burial circle. A small group of women prepare a body for burial, gently cleansing it, dressing it in the traditional shrouds, and offering prayers. In this seaside village in Israel in the beginning of the 21st century, the women find themselves each facing their own individual struggles as they make their lives in an area of the world rife with religious conflict and the near-constant threat of war.

The novel revolves around four women, Aviva, Lauren, Emily, and Rachel. Aviva, having lived in Israel for many years, knows of love and loss, as one of her sons was killed while serving in the national military. Lauren and Emily are each Jewish-American women who have come to Israel with conflicted feelings, following their hearts and hoping to be able to eventually feel comfortable in an environment so different from what they’d ever called home. Rachel, the youngest of the group, has come to the village after her college experience, in hopes to volunteer and make a difference. As they work together in the burial circle, they are reminded of the value of life, though how they each react to this revelation differs, as seen through the choices they make in their personal relationships and day to day lives.

While I found the characters’ story lines quite compelling, I have to admit that I found the storytelling format to be challenging at times. Each chapter is labeled with a specific date and focuses on one of the four women, but there was no consistency between chapters, so that sometimes only a week or two would separate one from the next, while at other times, an entire year would have passed. The characters often slip into interior flashbacks that are not clearly differentiated from the present day event or conversation taking place, so from one line to the next, there could be confusion requiring backtracking to fully understand the transition.

Once I understood the author’s style, I came to know what to expect in the storytelling, and I was better able to follow along. The characters’ stories themselves moved at uneven paces, though often each chapter dealt in the small happenings of their daily lives, but occasionally larger scale events would be documented, as well. The novel moves from 2000 to 2006, toward the burial circle first briefly hinted at in the prologue, and readers may begin to suspect for whom this ritual will be taking place as the book nears the end. Character-driven fiction, this novel presents an inside look at the challenges and joys of living in an area so mired in conflict, yet filled with religious tradition, and the power of friendship to help cope with such challenges.

We’re happy to be participating in the TLC Book Tour for A Remarkable Kindness.

« The Beautiful Bureaucrat
All Dogs Go to Kevin »