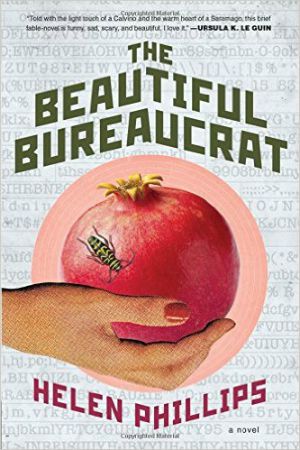 Coming in under 180 pages, The Beautiful Bureaucrat, a new novel by Helen Phillips, may be slim, but it packs quite a punch among its pages. Its slim size will not be the prime reason why readers finish it swiftly, but rather, this will happen because it is a novel that begs to be consumed rapidly, in a mind-boggling reading haze. Confusion will dominate many of the passages, but a confusion that compels readers to push forward, single-minded on getting clarification.

Josephine and her husband Joseph have moved to the city from an undefined area that they only ever refer to as the “hinterland,” and with very few possessions, they have sublet an apartment and are looking for jobs. In a rare stroke of luck, they both find employment, but neither speaks of his job to the other. The novel focuses primarily on Josephine and her job, from its bizarre genesis with an interview unlike any other to its endless monotony of entering files into the Database (upper case D apparent from the moment the word is spoken). The office in which she works in a long, windowless building that goes for blocks, more like a bunker than an office park. There is a lack of clarity to her task, no explanation as to what she’s inputting, or why she’s doing it.

The strange unfolding of the story clues readers in gradually to the meaning of the Database and Josephine’s job, while also revealing deeper, more intimate details about Josephine and Joseph’s relationship and their struggles.

I’m finding it hard to classify this novel, as it’s not a traditional mystery, even though the mystery of Josephine’s work environment and the small cast of characters within it propel the story. But it reads more like a sharp short story, with character development given briefly and concisely, with vivid images popping up from short passages of text. There is a haunting and chilling tone to the entire novel, from the very first sentence, that helps to create a dystopian feeling to the setting, even as it appears to be basically the modern day as we know it. The Beautiful Bureaucrat is wholly unique, and I recommend it for a reading experience that keeps you on your toes.