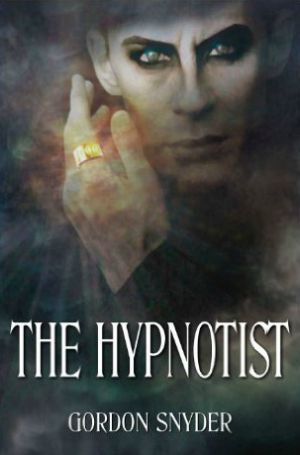 I enjoy historical fiction that is centered around real people or events. Adding fictional characters and plot lines to an event that actually happened makes that event feel like more than just a story, especially when said event occurred over 100 years ago. Author Gordon Snyder sets The Hypnotist (not to be confused with Gordon Korman’s The Hypnotists), the story of a man who hypnotizes young women and turns them over to the Chinese sex slave trade, during the year 1906 in San Francisco, shortly before and during the earthquake and subsequent fires that killed over 3,000 people.

Marta Baldwin is on her way to visit some of the poor families that her Pacific Aid Society helps when she comes upon a strange man. She can’t look away from his eyes and is about to succumb to his spell when suddenly she comes to her senses and is able to break away. Marta is shaken by her experience and confused as to how she was able to escape his clutches, but has other things to worry about as her family home is about to be taken away due to her brother’s lack of business sense and inability to run the shipping company inherited from their father.

Harold Prigg is enraged when the young woman slips through his fingers. Having learned the art of hypnotism at a young age, he uses his powers to lure young women against their will, then turns them over to the Chinese crime family who puts them into service in their brothels. He isn’t sure why he can’t hypnotize Marta, so seeks revenge by instead taking Missy, the young Irish girl who works for Marta at the Pacific Aid Society. Marta is determined to locate her young friend and enlists the help of Byron Wagner, a fellow member of her brother’s club, to find someone who may know this hypnotist and how to find him.

The middle of the story moves away from the hypnotist as Marta takes charge of the family finances in order to save her home, becomes embroiled in the society she despises, and fosters relationships with both Byron and Lillie Collins, an unconventional woman who has money and generosity and wants to use both to help Marta. But just as Marta thinks she has successfully avoided the hypnotist, she finds herself once again in his clutches, this time unable to break away.

The last part of The Hypnotist follows Marta and her friends and family dealing with the aftermath of the earthquake, trying to keep the raging fires from consuming their homes. The story tells of how the people of San Francisco broke societal bounds and worked together to stop the fires, provide shelter for the newly homeless, and save their city from further disaster.

The novel’s suspenseful parts keep the reader drawn in, and the slower narrative where Marta deals with her family issues are entertaining enough that the story never really slows down. The story really picks up as it draws to its conclusion and the reader finds out if Marta is finally able to escape the hypnotist once and for all.

« This Old Van
When the Moon is Low »