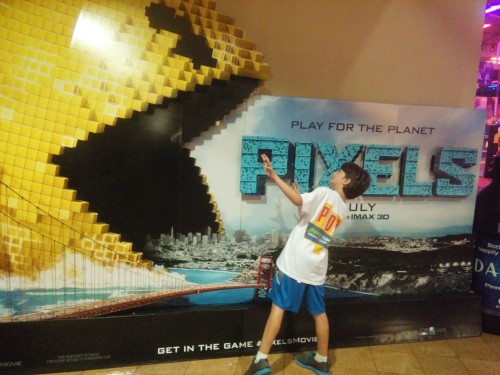 Disclosure: My son and I received complimentary tickets to the movie.

My son — like many 11-year-old boys — enjoys video games. I don’t suppose they call them that anymore, but he plays a lot of games on the computer and on his handheld console. When he saw the preview for Pixels online a while ago, he had to show me. I thought it looked like fun, and with Adam Sandler and Kevin James and Peter Dinklage, I thought it would at least be enjoyable if not a cinematic masterpiece.

Kyle and I both really enjoyed it.

When James and Sandler were teens, they competed at the video game championships. That video was sent into space with other 80’s paraphernalia to try to introduce ourselves to other life forms. They took it as a declaration of war, and so 20 years later, they have struck back by making those video games life-sized and out to kill. The military can’t really appropriately deal with it, so the President calls in his gaming buddies to try to defeat the enemies.

Yes, it’s simple. It’s suspenseful at times, and it’s mildly funny throughout. It was a good mother-son date.

I would say this is a very mild PG-13 (I actually thought it was PG when we went, and had I not looked it up, I might have just thought it was a heavy PG). There is of course the violence of war, but the war is against video games, so it’s no different from blasting Centipede or Galaga at the arcade. A few characters are sort of vaporized pixel by pixel are they are sucked into There are a smattering of swear words (Damn and Hell are uttered by the young teen version of the characters while the opening credits are still on). There is a reference to a threesome that I’m sure went over my son’s head.

I’ve seen bad reviews, and I guess I’m easy for enjoying it t face value. I thought Pixels was a lot of fun. If you are nostalgic about the video games of the past or if your kids are interested in video games now, chances are you’ll enjoy it. The 80’s references alone will give the over-40 parent a smile.

And really, I have three words telling you why you shouldn’t miss it, or maybe this sums up why others want to: President. Kevin. James.

LOOKING FOR A MOVIE TO SEE WITH YOUR TEEN? 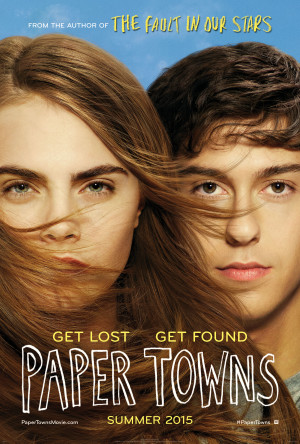 Check out my thoughts on John Green’s Paper Towns over at 5 Minutes for Mom, also in theaters now.

« Saved by the Bell Comics
Pretty Is »