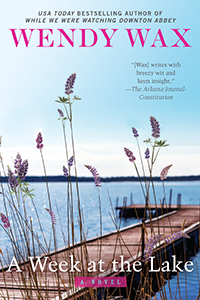 When Emma invited her best friends Serena and Mackenzie for a week at her lake house near St. George, it was supposed to be just a reunion of friends who used to spend a week each summer at the house even though the lived across the country. Things aren’t always the way they seem for anyone in A Week at the Lake by Wendy Wax.

It has been five years since Emma invited them, and as Serena and Mackenzie are preparing to head up to the lake house, they get a frantic text from Emma’s 15 year old daughter Zoe telling them she’s been in an accident and is at Mount Sinai hospital. They both rush there to help support Emma in her recovery from her severe head injury and subsequent coma.

While in the hospital, they do their best to keep Emma’s famous acting family – who she famously divorced when she was 14 – from turning her accident into a media circus or slowing her recovery. Her mother, Eve, seems particularly insistent that she will take control of Emma’s recovery, an attempt that Serena and Mackenzie rebuff with Emma’s blessing.

Once at the lake house, things in all three women’s lives begin to come to a head. Emma knows there was another reason she had invited her friends now after five years but thanks to her accident can’t remember what it was. Mackenzie’s husband Adam is in LA attempting to sell his screenplay and not calling or texting her as she would expect when they are on opposite coasts and neither at home in Noblesville, Indiana. Serena is still dealing with the rejection twenty years earlier by her fiance who married another woman back in their hometown of Charleston rather than make the planned move to New York, and he’s back on the scene.

The plot lines are sometimes worthy of a soap opera, especially with Nadia, the home health aide hired by Eve that none of them can turn away when they realize how much work it is to take care of Emma after her two weeks in a coma. Nadia’s broken English and super bodybuilder physique are both caricatures, as is her romance with a local librarian that comes to light.

All women deal with heartache and loss, not sure of what they should do as their own personal tragedies and dramas haunt them even in their idyll. The three friends don’t always get along smoothly, as Mackenzie derides Serena’s habit of dating married men while Serena shoots back that Mackenzie’s perfect marriage doesn’t appear to be so perfect.

Though it is at times a little silly and over dramatic, A Week at the Lake is a fun read. It was a fast-paced read, perfect to enjoy at the pool or beach this summer. I read it over the course of three days, with a whole day of busy life that kept me from picking it up at all, and I missed the characters and couldn’t wait to continue their story, definitely a good recommendation for any book.

Written by Michelle of Honest & Truly! who adores her friends and is grateful that she sees them more often than every five years. See what she shares of her life and friends on her blog Honest & Truly! or follow along with her on Twitter where she is also @HonestAndTruly.