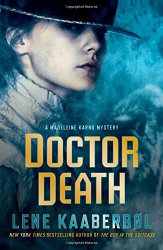 The year is 1894 and Madeline Karno is a young woman chafing against societal restraints. Her father is a noted pathologist at a time when the act of autopsy is in its infancy and is viewed as unseemly at best and immoral at worst. Madeline’s bright, quick mind longs to assist him, but he can only allow this in secret, as the idea of a young woman viewing a corpse is beyond repugnant to the general populace, and even as the daughter of a pathologist, Madeline is regarded with suspicion.

opens with the death of young Cecile Montaine just outside her home. The family only allows a cursory examination of her body, and both Madeline and her father are unsatisfied with the verdict of death from natural causes. The body bears signs of strange, healed bite marks, but the most unusual thing is a tiny white mite, a parasite that normally lives only in animals. The priest who prays over her body is brutally murdered, and then his corpse is stolen, and the young boy who brought him a message is missing. Madeline and Dr. Karno are convinced there is a connection, and that they are on the brink of a plague that could bring about many deaths.

Before they can figure it out, the trail will lead to a convent where Cecile attended school, to a tame wolf pack tended by the nuns along with a half-wild young man who is more comfortable with animals than humans, and to a German town where a young specialist in parasites may offer Madeline the independence she so craves–if she is willing to accept certain secrets on her own terms.

is very well-written and draws the reader in, and through many dark twists and turns. I wasn’t sure where the author was going at times, and wondered if she was veering into the paranormal, but in the end her topic remains the twistedness of the human soul. For me personally I found the mix a bit strong, and the ending hard to follow, but the characters are well-drawn and the plot moves briskly.

This is the start of a new series and I liked it enough to want to read the sequel.