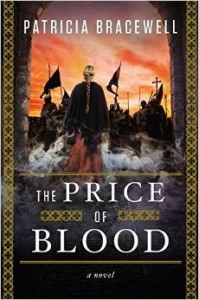 Queen Emma, the Norman queen of England’s Aethelred, is at the center of the second novel of the trilogy by Patricia Bracewell. While I haven’t read the first book Shadow of the Crown, I was able to pick up The Price of Blood and immerse myself into 1006 England and all the political intrigue therein.

When first opening the book, I was confronted with a list of characters and their relationships, which was a bit daunting as so many of the names are similar yet not familiar to me, leading to initial confusion where I would have to page back to that first bit of help to remind myself who was who.

The same thing goes for the list of vocabulary used in the book. Patricia Bracewell provides a glossary so that you can understand when the thegns have to pay a geld or the aethelings and ealdormen vie for places on the king’s witan. The language took a bit of getting used to, but after the first chapter or two, I was familiar enough with it that it became a nonissue and I was fluent in the language she chose to tell this story.

Though Queen Emma is at the heart of it, the book is not told merely from her point of view. Her husband Aethelred is plagued by the shades of his murdered brother and trusts no one in his kingdom, though as many chapters as are told from his perspective, I never developed empathy for him. His lack of faith in anyone makes it clear that his reign is destined for calamity.

There is also much shared from the perspective of his oldest son Athelstan, who Queen Emma loves, though she knows she can never give in to it. He is a stronger leader and frequently provides a dissenting view from his father, leading to conflict between them. As a many of barely 20, he often reacts in a petulant manner, running from his problems rather than addressing them head on. As old as 20 may be in medieval England, it is still “just” 20 in terms of some decision making.

Interestingly, another woman also frequently shares her story. Elgiva is the daughter of a powerful noble who Aethelred has murdered for supposed treachery. She manages to escape the trap and flees to one she hopes will shelter her. Elgiva is beautiful and devious, and was a one time concubine of Aethelred. She is convinced she will one day wear the crown based on a soothsayer’s prediction, and her secret marriage to a Danish warlord is her salvation. Cnut is one of those terrorizing England, though not ready yet to attempt to claim the throne. Her machinations lead to many of the problems facing England, yet they aren’t always ones that help her husband.

Emma’s main focus is to keep her children protected, and with the aethlings from Athelred’s first marriage significantly older, her young son Edward – who Aethelred named his heir – may be the victim of an “accident” to remove him from the path of the throne. As Aethelred sees Emma gaining more influence in his court through her interactions and donations to churches and abbeys, he grows more jealous and seeks to limit her influence both by ensuring she is with child – and therefore barred from court – and in taking her son away from her to be fostered by those who will ensure Edward grows up to be loyal to him and not Emma.

Though The Price of Blood covers a span of six years in its over 400 pages, it is easy to see how much there is left to share of Queen Emma. So much remains unresolved even at the end, and as much as it took some getting use to the language when I first picked it up, I didn’t want it to end. The third book in the trilogy won’t be out for awhile – the first book came out two years ago – which means I’ll have to wait, but if the final book is anything like this one, it will be well worth it.

Written by Michelle of Honest & Truly! who alternately wishes she could experience medieval England and is grateful for all the modern conveniences that today offers. See how she spends her life as she shares it on her blog Honest & Truly! and also on Twitter where she is also @HonestAndTruly.