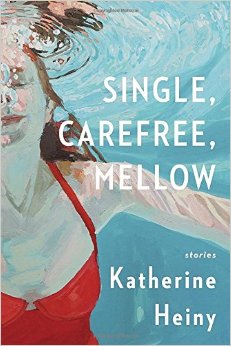 I couldn’t help but find some irony in the fact that I finished the final short story of Katherine Heiny’s Single, Carefree, Mellow: Stories on Valentine’s Day, a day devoted to love and, well, devotion. In these eleven tales, there is little devotion to be found, or perhaps just not the kind typically thought of in loving relationships. The women at the heart of these stories are each searching for something, so perhaps they’re devoted to the idea of love, even as their actions are often in direct opposition to it.

In fact, I came to the conclusion that the title of this collection is somewhat misleading after reading only a few stories. The vast majority of the protagonists here are not single, carefree, nor mellow. Most of the relationships involve at least one partner cheating on a spouse or already established significant other, not exactly my definition of single. I’m not confident that I’d label any of them carefree or mellow, either, as they all inhabit dark and tense places at the times of their stories. As many characters carry on illicit affairs, they live carefully planned lives of secret meetings and well-crafted cover stories. Again, not particularly lighthearted experiences.

While the choices of these deceptive characters are less than honorable, and in fact, are quite sad in their unhealthy effects, there are interesting insights to be found in the stories that speak to the conditions of attraction, relationships, and love. One particular character, Maya, who appears in several of the stories, struggles between accepting what she knows to be a loving and attentive partner and seeking fulfillment outside of that relationship either directly by cheating or by living vicariously through others. Readers see her in various stages of her primary relationship, though I found it difficult to assess if her character showed growth from one to the next.

The challenge for me with this collection was that I greatly enjoyed the smart writing that took on different narrative tones and storytelling devices in the stories, but I struggled with feeling much of anything for the characters. Perhaps it’s that my own personal life experiences differ from these characters in almost every way, and even though I could mostly refrain from judging the characters’ choices for the sake of literary analysis, I was somewhat disappointed by the lack of growth or any type of consequence with the characters. And by that, I don’t mean some morality-based punishment for adultery and deception, but any type of consequence in their own assessments of themselves and of their present and future situations. Appreciating the writing style and craft was easy, but I felt less of a connection to the characters than I usually do with contemporary women’s fiction.