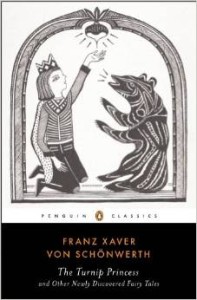 I grew up on fairy tales, and I have continued to love all the different iterations as they came along, from The Politically Incorrect Fairy Tales to Once Upon a Time on tv to the new translation of the Fairy Tales from the Brothers Grimm (my review from its release) and more. In college, one of my favorite classes was on interpreting myths and fairy tales from other cultures. And a new collection of previously lost fairy tales collected in the 1850s by Franz Xaver von Schonwerth has just been published, The Turnip Princess and Other Newly Discovered Fairy Tales.

Read Elizabeth’s round-up of Fairy Tales for Grown-ups over at 5 Minutes for Mom.

This collection of stories was collected solely in Bavaria where von Schonwerth was from. I find it fascinating that he was a high ranking civil servant who, on his own time, decided to go around the region to collect the oral traditions and stories because he feared they were dying out. He didn’t embellish them, and they are certainly not the ones that I grew up reading, but they fascinate me, and they’re so much fun to read.

Like the fairy tales from the Brothers Grimm before Disney got ahold of them and turned them into light and bright stories with a happy ending, many of these are darker and sometimes a bit violent, but they are nonetheless entirely fascinating. Each story is only a few pages long at most, which makes it easy to digest as many or as few as you wish in a sitting.

The stories generally have characters with attributes “the beautiful princess” or “the youngest son” or “the unhappy fisherman” but there are some Hanses and Karls in the stories from time to time. Regardless of the story, the action is always nonstop. He falls asleep and he wakes up three years later. There is no talk about the oh so soft bed with three mattresses made of the finest down from the swans making their home outside the castle or other flowery language. Instead, the focus is on what happens, all of which leads to fast paced, quick read stories.

The collection is divided into Tales of Magic and Romance, Enchanted Animals, Otherwordly Creatures, Legends, Tall Tales and Anecdotes, and Tales About Nature. The tales of romance aren’t the ones you’d expect where someone falls in love and pines away, toiling to win the love of some unattainable prince or princess for the most part. Instead, they meet, something happens, and they get married – though not always in that order.

Some of the stories I will admit that I don’t fully get. The first tale in the book – “The Turnip Princess” – is one of those. A man pulls out the nail from a bear’s leash in a cage and is supposed to bury it under a turnip. But he falls asleep and wakes up to find a turnip is now a bowl shape with a beautiful woman inside and he runs back to the cave where he finds the nail he had lost, puts it back in the wall and berates the old woman in the cave, demanding to know what she did with the beautiful woman. How he knew they were connected and how he figured out to remove it and know she would be the beautiful woman and that unlocked a spell went over my head. But in the oral tradition, that happens sometimes and you just have to go with it. The stories won’t always make sense, but logic is not meant to prevail.

Interestingly, though most of the Grimm Brothers fairy tales feature girls and princesses, the opposite is true of the von Schonwerth fairy tales. Though there are some “starrring” a female character, many are focused on the boys and men. They aren’t all heroes and they aren’t all perfect, but having them as the main character is something that really struck me in this collection of fairy tales.

My personal favorite is “Nine Bags of Gold” which is one of the stories featuring a female lead, the daughter of a miller who has no brothers or sisters but instead elves who act secretly as her brothers and sisters. They teach her everything she needs to know, and because she has been so kind of them, they help her when she wants to marry an apprentice her father rejects because he’s too poor. As with all the stories in the book, it’s a fun and quick read with the time from before she was born until she’s married with a child of her own managing her father’s old mill spans but two and a half pages.

While these aren’t necessarily the stories you would read to a young child like the ones from the old black and white checkboard copy of Mother Goose that I grew up on, they aren’t graphic or gory in any way and unlikely to truly frighten children. My nine and eleven year old children both picked up this book when they saw me reading it and giggled their way through it – just as it should be.

Written by Michelle of Honest & Truly! who is forever fascinated by fairy tales, but grateful that she’s never been cursed. See how she lives out her own fairy tale via her blog Honest & Truly! and follow her on Twitter where she is also @HonestAndTruly. 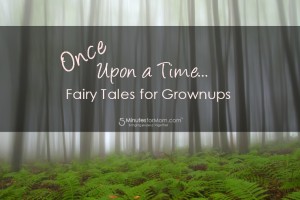 If you want to find more recommendations of Fairy Tales for Grown-ups, check out Elizabeth’s post at 5 Minutes for Mom.