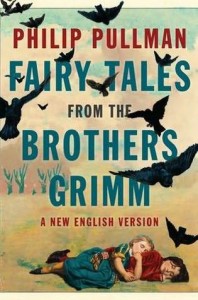 I love fairy tales. I grew up reading them, and my mom still has my Mother Goose collection. Remember that big book with the black and white checked background? As I grew older, I created my own fairy tale collection from Politically Correct Bedtime Stories and more. When I had the chance to read Fairy Tales from the Brothers Grimm: A New English Version by Philip Pullman, I jumped at it.

And really, fairy tales are popular right now. I have to admit that I was highly disappointed with the movies that came out this spring – Snow White and the Huntsman and Mirror, Mirror. Fortunately, there are TV shows that provide a far better treatment. I may not have cable, but I make sure not to miss Once Upon a Time or Grimm.

Those shows have reinvented fairy tales. The most recent episode of Once Upon a Time gave rise to the story behind how Captain Hook came to be – turning him into a real person with a nuanced background. They’ve done the same with Grumpy from Snow White and the Mad Hatter from Alice in Wonderland. Grimm has similarly taken fairy tale stories and creatures as the basis for storylines and characters and expanded upon them in a creative manner to develop sympathy for so many characters who were pushed to the side in the original versions.

Philip Pullman’s Fairy Tales from the Brothers Grimm does the opposite. Instead of taking the fairy tales as we know them today and expanding from there. Instead, he goes back to the basics, recreating the original, bare bones tales as best he could from texts, adding only details needed to make the stories flow better – many of which needed no such assistance.

The fairy tales include many that I’d never heard before. While they include classics like “Cinderella” and “Rapunzel” and “Hansel and Gretel,” there were plenty of others from “The Three Snake Leaves” to “The Donkey Cabbage” to “The Singing Bone” that were brand new to me. It was a nice mixture, and the commentary from Pullman – usually just a few paragraphs at most – left me feeling as though I’d learned something more than just a quick dip into childhood fairy tales.

The fairy tales are never repeated, though Pullman explains that they take many forms in many cultures, in addition to the multiple versions he waded through not just in German but in the Grimm Brothers’ various publications of their fairy tales over a 40 year period. I would love to see another collection that contained four or five fairy tales with five or ten of the best variations on the theme done in a similar manner. Perhaps this could be Pullman’s next project.

For the most part, the ones in this book follow the typical fairy tale formula of a generic character – a prince or a merchant or a brother instead of a name – who is simply but fully developed without much description through fast paced action. They aren’t fables, and they haven’t been prettied up to suit our modern tastes for a happy ending. There are be-headings, plenty of villains punished by being rolled in a barrel with studded nails, and heads cut off all manner of people and beasts.

And the book is entertaining. The stories are a quick read, and they are cute. They aren’t deep by any means, but they aren’t meant to be. And while this is a book of fairy tales, I certainly wouldn’t simply hand it to Mister Man. Some of the stories aren’t aimed for today’s children. That said, there are some stories in here that I’d love to read to the wee ones at bedtime.

Michelle only wishes her life were as simple as a fairy tale, where she could find the magic leaf that would clean the house instantly or provide her with a gold coin under her pillow each night. Instead she lives the more typical life of a mortal instead of a fairy tale character. See what her life has dealt her on her blog Honest & Truly! or follow her on Twitter where she tweets as @HonestAndTruly.

« On Reading: Train Your Child to Enjoy Reading
Make the Bread, Buy the Butter (with Giveaway) »