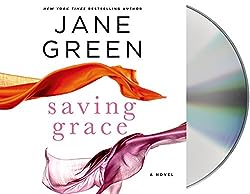 Grace Chapman appears to live a charmed life – married to a successful novelist, living in a beautiful home in the New York City suburbs, volunteering at a women’s shelter where she teaches the residents to cook. But looks can be deceiving and only a few of her closest friends and family know how volatile her husband, Ted, can be. Grace walks on eggshells, never knowing what Ted’s mood will be like. And only Ellen, their assistant of 15 years, can handle his temper. But Ellen has left her position to take care of her ailing mother and Grace is floundering without her. So when Grace meets Beth, a woman who seems perfect to take over for Ellen, it’s a dream come true, and Beth seamlessly takes over both as Ted’s assistant and with household chores.

But just as their household settles down, Grace starts having mood swings and bursts of anger. At Ted’s urging she sees a psychiatrist who confirms Grace’s worst fear — she is diagnosed as bi-polar, just like her mother. As Grace takes drug after drug to control her moods, she loses control of her life, and also begins to realize that many of the things that have happened have been because of Beth.

The story of the woman who takes over another woman’s life has been done before, and some would say, done better. But Jane Green has such a way with her characters that the familiar plotline is just part of Grace’s story. It’s a testament to her ability that none of her main characters resemble the others, other than the fact that they’re British. The supporting characters — Grace’s best friend, her daughter, even Beth and Ted — are unique and well drawn. My one complaint is that there are recipes at the end of several chapters, and it almost feels like Grace is a chef only so the recipes could be included. They’re unnecessary, and often jarring when following a dramatic scene.

While I had some issues with both the plot and the audio version (see below), overall I enjoyed Saving Grace, and feel fans of Green’s other work would enjoy it as well.

Notes on the audiobook:  I’m not a fan of Jane Green’s narration of her own books, and I likely wouldn’t have listened to this one if I didn’t receive it unsolicited from Macmillan Audio. She has given up all attempts at an American accent and tends to be overly dramatic. Also, it’s harder to skip the recipes when listening to the audio book.