My oldest child has been a book lover from early on. As an infant, he would look up as I showed him board book after board book held above us as we lay on the living room floor. Even with his active nature, as a preschooler, he would sit on my lap for picture book read alouds. Now that he’s a teen, he’s still a big reader, but if left to his own devices, I’m fairly certain that he’d read nothing but Marvel comics. If I pick up novels from the teen section at the library, he’ll read them. If I stack newly released YA books on his desk, he’ll grab them eventually. But what I’ve come to really appreciate is the power of a magazine basket in a room where they’ll get undivided attention… the bathroom, of course. 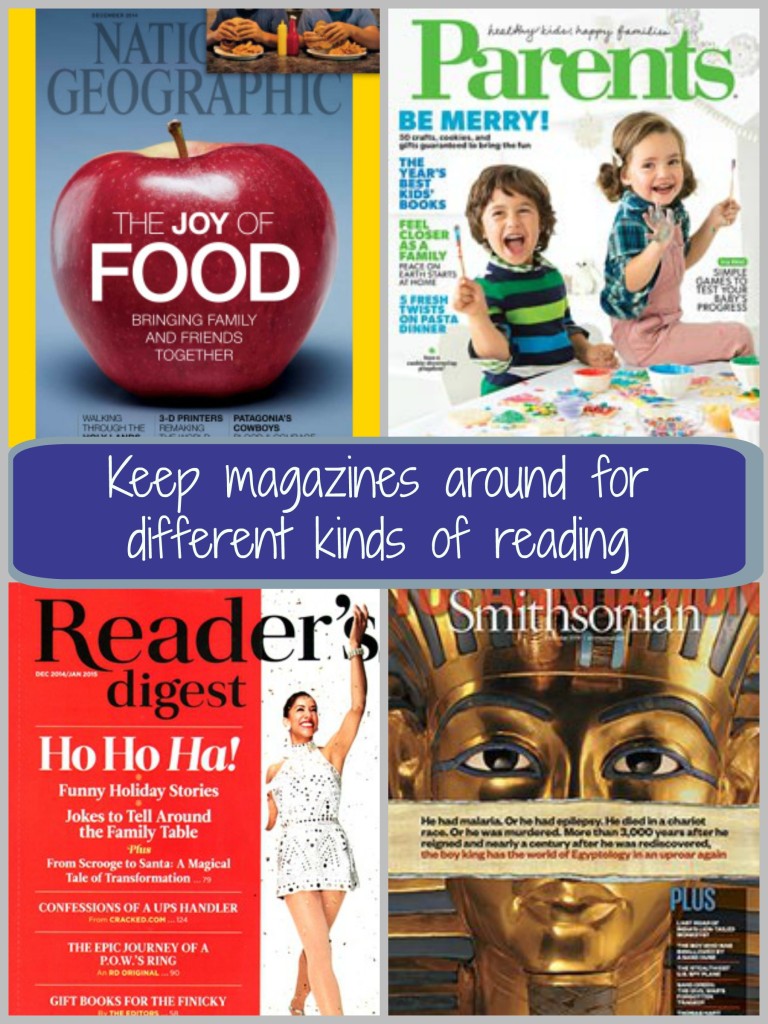 Ours is filled with the monthly offerings from a few sources, the ones shown in the picture collage here: Parents, Reader’s Digest, National Geographic, and Smithsonian. It’s a mix of gift subscriptions from our parents and one that I’ve subscribed to for pretty much as long as I’ve been a mom. It’s always exciting to see them in the mailbox each month, but truth be told, I don’t read all of them as much as I should. But, by their being in the bathroom, they do get read a lot by my teen, and even his younger siblings will flip through the “lighter” options in there.

While he’s definitely likely to tell me jokes he’s read in the Reader’s Digest or share a funny toddler story from the last page of Parents, I’m impressed when he’ll start a conversation about a longer article from one of the more “serious” magazines in the pile. It’s not unheard of for me to find a months-old Smithsonian on his bedroom floor because he wanted to continue reading an article or two. We’ve chatted about historical events, explorations of unfamiliar parts of the world, and perspectives on conflicts here and abroad.

Nonfiction can sometimes be underrepresented in what children read for pleasure. I’m not expecting that my son, or any of us, will read all of our magazines cover to cover each month, but the exposure to ideas, opinions, and unique reporting that is present in our collection pleases me. Adolescence is such a time of being in between two worlds, childhood on one side and adulthood on the other, and magazines offer a nice mix of interesting, informative, and entertaining reading selections, but often written at an adult reading level.

Do you subscribe to any magazines? Do you find your children browsing through them, too?