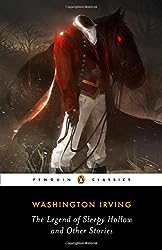 My first introduction to “The Legend of Sleepy Hollow” was courtesy of Judy Blume’s Otherwise Known as Sheila the Great, when Sheila Tubman and her family spend the summer in Tarrytown, NY, where she befriends a girl who lives in Washington Irving’s old house. The headless horseman has been the subject of many remakes and knockoffs over the years, the most recent being Fox’s series Sleepy Hollow, now in its second season. My husband and I have been fans of the show since it first started airing, yet I had never read the story from which the legend originated.

“The Legend of Sleepy Hollow” is one of many tales by Washington Irving, first published in a book of stories entitled The Sketch Book of Geoffrey Crayon, Gent.  The story is said to have been found among the papers of the late Diedrich Knickerbocker, a fictitious writer attributed to many of Irving’s tales, including “Rip Van Winkle.” Penguin Classics recently re-published The Sketch Book as The Legend of Sleepy Hollow and Other Stories, with an added introduction by Elizabeth L. Bradley and end notes explaining some of the references and terminology in the stories. Check out this spooky trailer, sure to get you in the Halloween spirit:

There are quite a few differences between the Fox TV series and the original story, the most obvious being that the show takes place in current day, with Ichabod Crane awakening 230 years after his death during the Revolutionary War, where he was an English soldier serving as a spy for General George Washington. The headless horseman, killed by Crane when a cannonball beheads him is also resurrected, and turns out to be one of the four horsemen of the Apocalypse. Crane joins forces with police lieutenant Abby Mills to prevent the world from ending. Both versions take place in Sleepy Hollow, NY, and the headless horseman fears daylight in both, but that’s about where the similarities end.

There are many things that we enjoy about the show — Tom Mison’s Crane and Nicola Beharie as Abby have wonderful chemistry without the will-they-won’t-they that gets annoying, Crane makes snide remarks about today’s technology but often enjoys the conveniences it provides, and supporting cast members Orlando Jones as the police captain and John Noble as the second horseman who is also Ichabod’s son are both wonderful. And yes, the story gets somewhat convoluted and confusing, but I definitely can’t say it’s boring.

If you’re looking for something different from the police procedurals and medical dramas that seem to be inundating the airwaves, then check out Sleepy Hollow.