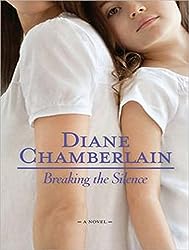 I have a tendency to procrastinate, and reviews without hard deadlines are usually the victims of this habit. So when I write up a book within hours of finishing it that’s a pretty good sign I really liked the book. I finished Diane Chamberlain’s Breaking the Silence just about 2 hours ago, and the only reason I didn’t sit down and write it up right then is I was sitting in my car, waiting for soccer practice to end, and then had to feed the kids. Pesky life getting in the way.

Laura Brandon is woken in the middle of the night by a phone call that her father, who has been ill, is not going to live much longer. She gets to the hospital in time for him to tell her to take care of a woman named Sarah Tolley, someone Laura has never heard of. Against her husband Ray’s wishes, Laura goes to see Sarah, an elderly woman in the early stages of Alzheimer’s, who has no idea who Laura’s father is or how she should know him. When Laura returns home, she finds her 5 year old daughter, Emma, screaming uncontrollably, and Ray dead of a self-inflicted gunshot wound.

Several months later, Emma still has not spoken a word to anyone, even Laura. While the trauma of Ray’s suicide is clearly the cause, it’s unusual for a selectively mute child to not even speak to loved ones, and Laura is at a loss as to how to help her. At Emma’s therapist’s advice, Laura seeks out Dylan Gear, a one-night stand from 6 years earlier who is Emma’s birth father. Dylan has his own demons to battle but agrees to meet Emma and finds he relishes the thought of having a daughter, something he never thought possible.

Laura continues to visit Sarah, taking her on walks and listening to her talk about how she met her husband, Joe, her life as a psychiatric nurse in a hospital performing research on the unwitting patients, and how she lost Joe and her own daughter, Janie. Meanwhile, Laura receives anonymous letters warning her to stay away from Sarah. And as Laura and Dylan bond over their shared worry for Emma, they grow closer to each other.

While I listened to the audio version of this book, had I read the print version, this is one I would have stayed up late reading. I found excuses to listen whenever I could. The characters are real and riveting, and as Laura tries to break both Emma’s silence and through Sarah’s barriers of Alzheimer’s, the story unfolds in a way that keeps you coming back for more. While I’m growing tired of past-and-present type novels, the way the two stories are woven together is very well done, keeping me guessing as to how Sarah and Laura are connected.

Notes on the audiobook: The narrator of Breaking the Silence speaks in a soft voice, almost a whisper, which at times made it hard to focus on the story. But as it got further in the writing was more than enough to keep me interested. While the mass market paperback was released in 1999, it was reprinted in 2009, and Tantor Audio now has released it on audiobook. You can listen to a sample on their site.