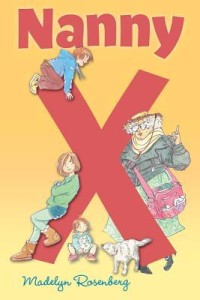 When their mother goes back to work as a lawyer, Ali and Jake aren’t thrilled. They’re less thrilled when they meet their new nanny that first morning in Madelyn Rosenberg’s latest offering Nanny X. She appears during breakfast and introduces herself only as Nanny X and somehow seems to know all sorts of things about them that they hadn’t even told their parents, like how Ali got into trouble at school the previous Friday for chewing gum.

Lunch was a disaster with peanut butter and anchovy sandwiches, but things pick up after school when Nanny X agrees to take them to a rally to save their local park. While there, their friend Stinky is arrested for throwing a rock at the mayor even though they know he didn’t do it. Nanny X reveals that she’s truly a secret agent for the Nanny Action Patrol (NAP), and they’re on the case.

Hilarity ensues with humor that definitely fits an elementary age child from Nanny X talking into a diaper that’s really a phone to Jake referring to Ali (in his head only) as Super Snot. The book has just over 100 pages and is very approachable for a reader who’s ready to move up into slightly more challenging chapter books.

With the story told from alternating perspectives of both Ali and Jake, it’s a book that appeals to both boys and girls. I love that it has some great lessons in there from teamwork to not judging someone before you get to know them to standing up for what you believe in. The book doesn’t take itself seriously, which is half the fun of reading it.

Some of the nonsense, like a bib that works as a radar for tracking devices when held under purple light or baby cookies that are actually listening devices are ingenious inventions that absolutely fit the tone of the book. It’s a great way to draw reluctant readers into a detective book, and with the end implying that there are more books to come, it could be an amazing segue into a new series.

Written by Michelle who never had a nanny and is now torn between wishing she’d had one and being grateful that she didn’t. Check out her much more boring life on her blog Honest & Truly! and follow along with her on Twitter where she is also @HonestAndTruly.