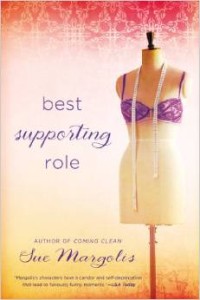 You know an author has done an outstanding job of developing characters when you’re trying to hold back the tears by page 21. That isn’t to say that Best Supporting Role by Sue Margolis is a tear-jerker throughout. The often funny novel follows Sarah Green as she tries to sort out her life following the death of her husband.

Sarah was living a life she loved with a successful husband at a top advertising firm and two adorable children who attend a posh school. She’s finished renovating the Victorian, but her husband Mike’s gambling has turned from a lad’s night out activity into one that is threatening to bankrupt them. Her inability – once again – to withdraw cash from an ATM at Christmas is what sets her over the edge, and she finally decides that she has to leave the husband she still loves. Before she has a chance to tell him, he dies in an accident.

With no life insurance and creditors already after her family, Sarah sees little hope and takes the first job she’s offered, eventually dating a staid man who is as opposite Mike as can be. That isn’t what makes her happy, nor is it where her life takes her as another relative dies, this time an aunt who owns a high end lingerie boutique where Sarah takes her own gamble to make a go of it.

Part of what I love about Best Supporting Role is that it isn’t just Sarah who I root for. The supporting roles are all so well-developed that I can almost see each one of them from Imogen who is head of the parent association at the posh school but is old enough to not care about what anyone thinks to Sarah’s daughter Ella who is a five year old I actually enjoyed reading about.

I love that I can relate to so many of the issues Sarah faces from not fully fitting in with the other mothers are her posh school to not wanting to call her parents when times get tough to alternating elation and despair when it’s time to make a change in life, not to mention the frazzled moments of parenting that are all too real.

The story moves quickly, as there is so much to say, and the pages speed along. There are some places where the book becomes a bit trite, but not in an unpleasant way – you simply feel like you know what’s going to happen and wait for it. The last hundred pages weren’t quite as compelling as the first two-thirds of the book, but by then it’s clear that Sarah has found a path for her life and is in the process of taking it. Part of what made the early portion of the book so outstanding was the uncertainty of it and of Sarah and watching her try on and discard various roles.

That isn’t to say that the end of the book is a disappointment, merely that it’s hard to keep up the magnificence of the book throughout. And yes, there were more tears shed by me at the end. I love that none of the characters are quite the way you would pigeon-hole them. Sarah starts out by believing that Hugh, a builder she’s interviewing, is a flashy gentleman builder who will bill an astronomical amount because he can but quickly finds out that she couldn’t be more wrong. Her new best friend is another unlikely candidate, a newly single mother with an 8 week old who has a most unconventional job. Even the gossip hungry old lady across the street from Sarah has much more to her than automatically assumed.

Sue Margolis is an incredibly talented writer, and this is not her first novel. She has also written Coming Clean and several other novels that follow this same funny and poignant model. They are most definitely on my to read list, the highest compliment I can give to an author.

Written by 5 Minutes for Books contributor Michelle who is grateful that her husband’s gambling is limited to irregular poker nights, as she has no talent for design and would fail at running a lingerie shop. See what she is talented at via her blog Honest & Truly! and follow along with her on Twitter where she is also @HonestAndTruly.

« Our Summer of Agatha Christie: And Then There Were None
Mr. Mercedes »