In the title story in The Sea Garden, 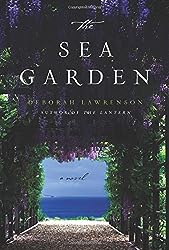 Ellie Brooke is a garden designer, brought to the island of Porquerolles, off the coast of France, by the eccentric owner of a mansion to bring the overrun garden back to its former glorious existence. Her attempts to learn about the garden and draw up designs are thwarted by the owner’s mother, who wants the garden left as is. Her trip is also overshadowed by a suicide on her ferry ride to the island, and her interactions with an friendly but odd man who also witnessed the suicide, yet the police can’t seem to find him.

Marthe Lincel of The Lantern is featured in the second novella, which takes place during World War II in Nazi-occupied Provence. Marthe has been blind since childhood and is drawn to the perfume-making business. She’s taken in by the owners of a perfumerie, who are also members of the Resistance to the German occupation. While they initially keep Marthe out of their activities, her knowledge of Braille becomes a useful skill for their operations.

Part three tells the story of Iris Nightingale, an English operative in the Special Operations Executive in London, also during the war. She recruits agents who are sent into France, falling for a Frenchman whose allegiances aren’t clear. When he disappears at the end of the war, she spends years trying to track him down, along with the women who were sent into enemy lines.

The link between the three stories is not revealed until the final pages of the novel, but this is a case where it’s the journey that counts, not the destination. Deborah Lawrenson has a gift for prose, her descriptions of sounds and smells bring them to life. I liked the format of having the separate stories in 3 distinct sections, rather than jumping back and forth in time, which can be jarring and doesn’t always work.

Many characters are based on real people who were key to the Resistance during the war, and the events that occur really did happen, which makes them all the more interesting and important. The French are criticized for not putting up much of a fight when the Germans invaded, but there was a small group of citizens who were instrumental in blocking German activities and harboring refugees, and those in Provence especially are proud of their involvement during the war.

I really enjoyed all three stories, looking for clues as to how they’re connected and trying to figure out which events really happened. I also was pleased by the appearance of Marthe and the explanation for her part during the war, which is alluded to in “The Lantern” but never explained. Reading that book is definitely not necessary to enjoy “The Sea Garden,” but those who have read it will notice the link between the two.

Those who enjoy World War II fiction, island mysteries, and the role of women during the war should check out “The Sea Garden,” you won’t be disappointed. Read more reviews on the TLC Book Tours page.