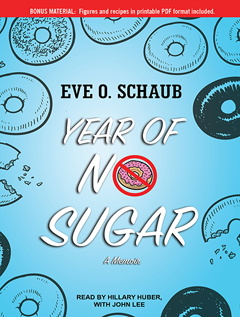 First I saw the movie Fed Up (click over to my thoughts at 5 Minutes for Mom) which raised my awareness about the true nature of sugar. Eve Shaub’s awareness of the toxicity of sugar came when she watched Dr. Robert Lustig’s popular YouTube video explaining it. She then became familiar with Australian David Gillepie’s book Sweet Poison.

The memoir starts off with Eve Schaub explaining those findings that grabbed her attention. Then she decides to jump in all the way — a year of no sugar — not only for herself but for her husband and two children (ages 6 and 9, I think).

This type of memoir is always one that I always enjoy reading — a project with a goal sharing all the reasons for the goals and the pitfalls in keeping it. But this one adds in the element of a growing movement which has interested me, that of awareness and avoidance of all the extra sugars that exist in our prepared foods.

Most of those critical of the book take umbrage at the fact that it was not really a year with NO sugar, because as a family, they did have one dessert with sugar (fructose sugar) each month. There were also exceptions made a few other times. But to me, it makes it more real. They tried to avoid anything with any added fructose, including trace amounts that occur in commercially baked bread, mayonnaise etc, but built in a few exceptions and rules aimed at helping her family survive the experience.

Schaub was forthcoming about the results and struggles — the struggles were many, since sugar is everywhere, especially for kids,and whether you are trying to eliminate sugar or reduce it, it’s very difficult. The results were kind of surprising to me, no real weight loss or health benefits that she could name, but her conviction that sugar is unnecessary and dangerous (yes, a toxin that should be avoided) didn’t change.

Whether you are hoping to reduce or eliminate sugar yourself or are just curious about her experience, A Year of No Sugar was interesting read to those who are curious about this choice or who like project memoirs.

This made a good listen. Narrator Hillary Huber did a great job, and it made me feel immersed in the Eve Schaub’s story. Another helpful thing is that recipes (there were a few shared) are on a PDF file that is included on the disc and made available on the Tantor Audio page. You can also listen to a sample there.

« A Possibility of Violence
Little Mercies by Heather Gudenkauf #Giveaway »